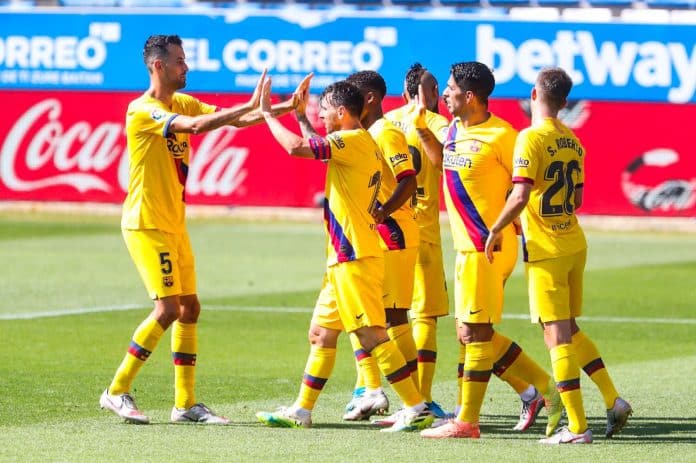 The Blaugranas are back with a brilliant performance away from home at the home of Deportivo Alavés where they have thrashed their opponents by 5-0 and has put up a dominant show to end their league campaign. Even though they have lost their league title still the football we have seen today is what every fan wants to see from the side with every match.

A complete dominance shown by the Quique Setien’s side with brilliant teamwork and some excellent passes to rip off Alavés’s defence. The youth stars of Barcelona again helps to energize the squad and play an attacking football having the ball in possession. We saw Riqui Puig making runs and take some great shots as well along with Ansu Fati placing some brilliant balls for Saurez.

With some attacking waves from the Barcelona squad everyone could sense a goal is incoming from the Blaugranas. After some missed chances of Messi, Saurez and Vidal, the Barca captain put a brilliant cross for Ansu Fati who was quick enough to predict and run in the penalty box to score the opening goal with a nice volley.

Riqui Puig placed a brilliant ball forward for Suárez who just couldn’t finish it, the after the cooling break, Sergi Roberto switched gears to setup the attack to find Riqui Puig on the left who made no mistake to find Messi who scored a brillaint goal to make it 2-0. Although Alavés tried to counter-attack but the young Ronald Araujo and Lenglet stood firm in the deep.

Another great chance came in the form of Messi’s pinpoint cross with a great header from Vidal but was somehow saved by their goalkeeper. Although we didn’t have to wait much longer for the third goal from Luis Saurez that was set up by Messi and Jordi Alba on the overlap, also it was a great header from the Uruguayan as well.

Alavés made a good start to the second half with three substitutions but in the meantime, Lenglet gets injured and had to leave the pitch and had to be replaced by Nélson Semedo. Vidal played as a central defender for the rest of match but Barca didn’t stop, thanks to the likes of Ansu Fati, who was pairing flawlessly with Messi and obviously Riqui Puig who laid an accurate pass for Semedo who found the back of the net like a rocket.

This boosted the confidence for the Barca side in the second half and made the score 4-0 and soon Frenkie De Jong replaced Sergio Busquets. Then the squad likes to slow things down a little bit passing the ball in their own half and Alavés hoping to end the game soon and just then the Dutchman stepped up to start a move and Jordi Alba marked his second assist for the game and Messi made 5-0 for Barca.

Martin Braithwaite replaced Ansu Fati and made some runs with the ball from Messi but never ended up scoring goal but still played a good cameo in the dying minutes of his last game this season. Neto kept a clean sheet on his birthday, making his debut after a long time and the Champions League returning in just three weeks, this away win will play a significant role to boost the morale of the Barcelona squad.

An impressive team performance, especially by the likes of Puig, Fati and Araujo who have shown how capable, are they for the first team. Messi, as usual, was brilliant with 2 goals and an assist along with positive signs shown by Saurez and the team as a whole whose main focus is on Champions League. It seems Messi’s “being self-critical” has worked out well for the team.