Arsenal beat both Liverpool and Manchester City in a week 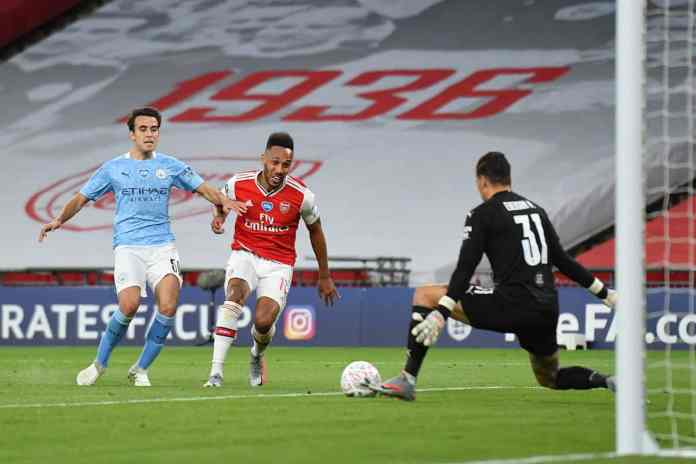 Probably no one would have thought or it would have never come to their mind that Arsenal can beat the top two English teams inside a week! Mikel Arteta’s team is far away from Arsene Wenger’s ‘The Invincibles’. Many people would have predicted that it was going to be a nightmare week for the Gunners. But Aubameyang and co have surprised all of us!

On Wednesday, Arsenal hosted Liverpool in the Emirates for a Premier League match. Arsenal had never won against Jurgen Klopp’s Liverpool and it seemed Liverpool would carry on the unbeaten streak. But some unseen foolish errors from Virgil Van Dijk and Alisson cost Liverpool two goals.

Arsenal defended gracefully and Mikel Arteta’s men successfully held on to a 2-1 scoreline for a notable victory. It was their first win over Liverpool since 2015.

Many thought that Arsenal were lucky as Liverpool so rarely makes mistakes. So in the FA Cup semi-final match between Arsenal and Manchester City, not many gave Arsenal a chance of progressing to the finals.

On Saturday, Mikel Arteta’s men took on Guardiola’s Manchester City. Kevin de Bruyne was expected to tear apart the fragile Arsenal defence along with Sterling. But Arsenal took a lead quickly in the 17th minute.

Pepe gave a brilliant assist as Aubameyang’s shot hit the post and ended up inside the nets. It gave the Gunners some hope to pull off a miracle twice in a week. City tried so hard to penetrate the defence but almost failed to hit a single shot on target in the first half.

Arteta’s men gained in confidence as Tierney played a ball over City’s defence and Aubameyang’s quick enough not to be caught by City defenders. He coolly scored through Ederson’s legs to make the score 2-0.

Arsenal has pulled off two massive results inside a week. It shows that Arteta is leading the team in the right direction.

Arteta said as Arsenal go through to the FA Cup finals: “We’ve had an incredible week to beat the best two teams in Europe, it doesn’t happen every day.”

“I don’t care who plays, I can trust them – we made changes and everyone was ready. We had to suffer in many moments. We had to be really well-organised and minimise the spaces.”

The Gunners now need to trust Arteta and spend big in the transfer market to bring in quality players. Arteta has shown that he has learnt pretty well from his former boss Guardiola and he is ready to take Arsenal to new heights with the right kind of players.