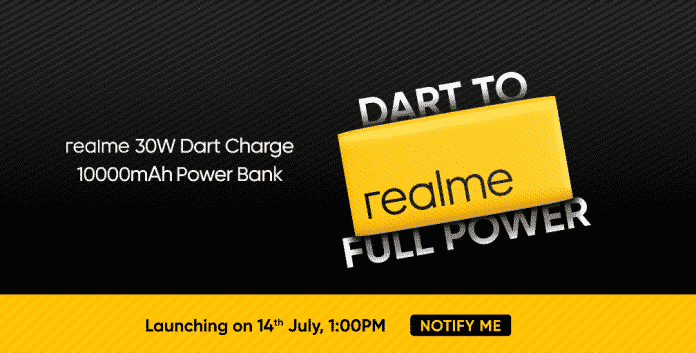 Realme is launching another smartphone accessory on July 14 and this time it is a 30W Dart Charge capable power bank that can provide the output of up to 30W for your device. The launch will take place tomorrow from 1 PM onwards. There is no other news about any other product launch for tomorrow, but CEO Madhav is already hinting some product from his tweets.

Realme 30W Dart Charge 10000mAh Power Bank is a two-way charger that means it can take both input and output at the same 30W power. The claims that this power bank will be able to fully charge a Realme device in roughly 1 hour 40 minutes and same goes for the power bank as well, the 1000mAh battery fully charges within 1 hour 36 minutes.

There is a “Notify Me” button in Realme website by clicking on it users can view all the details of the launch tomorrow. Last month Realme launched the 18W two-way Power Bank 2 (10000mAh) is India which is available at Rs.999. The Realme 30W Dart Charge 10000mAh Power Bank is priced in China at CNY 199 (roughly Rs.2,100) for both Black and Yellow colour options. So we can expect that it will be priced around Rs.2,000 in India.

As mentioned by the company’s website Realme 30W Dart Power Bank will come with a carbon-fiber body and will have a capacity of 10,000mAh. It will support multiple fast-charging solutions such as Dart, VOOC, QC, and so on. The company has not revealed all the solutions but these are the few mentioned on the website. The power bank will also feature 15-layer charging protection.

There will be a low current mode on the Realme 30W Dart Power Bank, just like the Power Bank 2 (10,000mAh), to charge Bluetooth-enabled devices such as Truly Wireless earbuds, speakers, and more or to be exact AIoT devices.

It will support charging of two devices simultaneously through its USB Type-C and USB Type-A ports. Realme claims that this power bank can charge Realme 6 up to 65 percent in just 30 minutes and the power bank itself can be fully charged within 1 hour 36 minutes. Realme 30W Dart Power Bank further has LED lights to indicate its battery level.