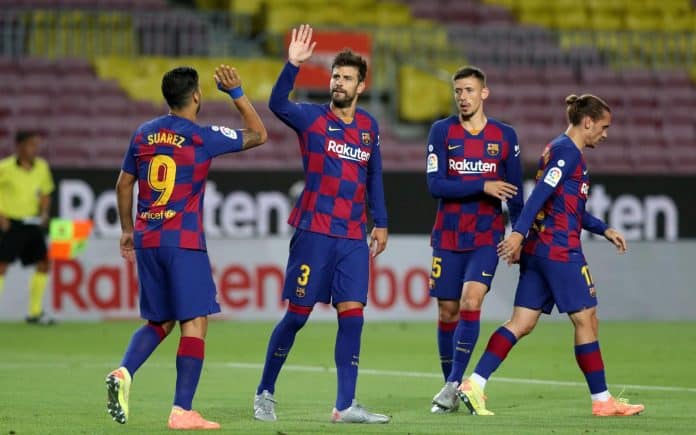 Yesterday night Barcelona played against Espanyol at the Camp Nou and somehow managed to keep the score 1-0 and beat Espanyol in the derby. Barcelona didn’t play a convincing first half and struggled to break the sticky defence of Espanyol but thanks to Luis Suárez’s second-half goal was to secure the much-needed win and officially relegate Espanyol to Spain’s second division.

Here was the starting XI for both the teams:

The first half looked very boring as Barcelona was unable to penetrate the defence even though of the fiery MSG trio that destroyed Villarreal on Sunday. The midfield also lacked creativity even though we saw Sergi Roberto occupying the midfield and we could feel the presence of Riqui Puig and Frenkie de Jong much more important.

Barcelona was very much prone to counter attacks that forced Ter Stegen into action, they were slow at the ball and when lost ball paved way for Espanyol to run into the weaker Barca defence lacking the full-backs who almost play as wingers in the new Barca system by Quique Setien. Dídac almost found the goal inside the box after a quick break, but the left-back hit the post with his weaker right foot.

Although MSG pair strived and were looking to take advantage of the spaces that were created they lacked finishing and Messi to missed free-kick chances as well.

Semedo was taken off and replaced by Ansu Fati, which was a good attacking move by Setien but unfortunately, instantly he was shown a red card for a dangerous challenge on Calero. Just minutes after that incident, Lozano was sent off for a dangerous tackle on Gerard Piqué and both of the teams were down to 10 men.

After that incident, Barcelona took the advantage by breaking into Espanyol’s defence thanks to Griezmann’s run, Messi’s deflected shot came into Saurez’s leg, who made no mistake by scoring the only goal to relegate their opponents.

So, to still stay in LaLiga first division, Espanyol tried hard to attack and score two goals which gave some spaces for Lionel Messi to make a sensational volley that was well saved by the experienced Diego López. After that Barcelona looked exhausted and was replaced by Arturo Vidal and Martin Braithwaite but with long throughs, Espanyol looked dangerous but Barca survived with just a goal until the final whistle came.

Even though this was not a convincing match from the Blaugranas, still they keep themselves hopeful in the title race which favors Real Madrid the most now.