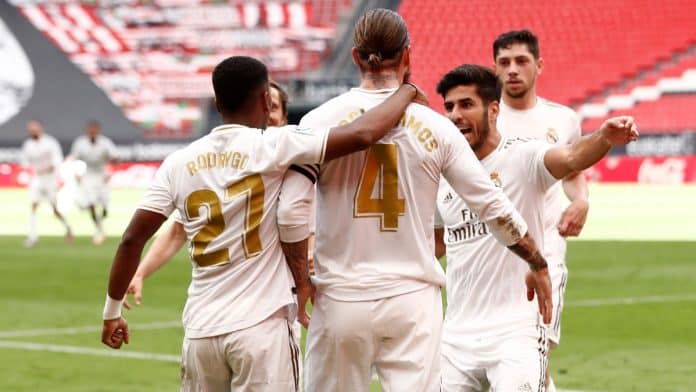 Zinedine Zidane is once again proving to the world how good a manager he is! He left Real Madrid in 2018 after winning 1 LaLiga and 3 consecutive Champions League title.

Cristiano Ronaldo left for Juventus in 2018 too. Madrid had the worst season in a very long time but Perez again brought in Zidane towards the end of last season. Zizou has once again turned his magic wand and transformed this team into a group of Champions.

Zidane is about to win La Liga with the same guys people said were old and done. Mendy has had a fairly big season and Rodrygo has played a part, but that's it. Hazard and Jovic could have played for Chelsea and Frankfurt, and no one at Real Madrid will even notice.

Real Madrid has won all of their seven matches after the 2019-20 season resumed on 11th June. This Real Madrid side has been so consistent. They have not been at their best or have played the most beautiful football always, but they have kept their patience to let the opportunity come and then pounce on it.

Once again, Real Madrid was made to work hard by this talented Athletic Club side. But a moment of brilliance from Marcelo earned them a penalty and their captain Sergio Ramos coolly slotted the ball home.

Real Madrid left-back Marcelo now has 350 victories in the famous white shirt. What a player he has been for the Los Blancos! No one would have thought that Real Madrid could replace Roberto Carlos but Marcelo has proved everyone wrong.

With this 1-0 win, Real Madrid are now 7 points ahead of second-placed Barcelona. Although Barcelona has a game in hand and will play against Villareal tonight. But the title race is almost over. Unless Real Madrid commits some tragic mistakes in the next few matches, I can’t see them losing points against those teams – Alaves, Granada, Villareal and Leganes.

Among the remaining matches, Villareal are the toughest so even if Real Madrid drop points in that match it won’t be enough for Barcelona to win the title. If Barcelona win all their remaining five matches, they will gather 15 points at most. So, Real Madrid now need just 8 points from their remaining 4 matches to secure the LaLiga title.