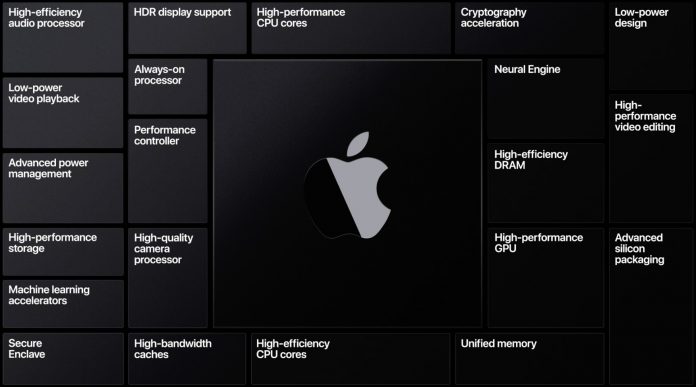 Apple recently announced that it will be shifting from Intel to its in-house silicon basically due to the failure in performance from Intel’s SkyLake architecture. Apple has made significant progress in its design point-of-view and made its ARM-based SoCs even comparable to the latest Intel ones.

The transition from Intel to ARM-based chips will take almost two years and to help developers with this transition, Apple gave away the Developer Transition Kit. This DTK is powered by the octa-core A12Z Bionic chipset seen in the recent iPad Pro which is even more powerful than the Intel Ice Lake-Y CPUs that powers the MacBook Air 2020.

The DTK is paired with 16 GB of RAM and a 512 GB storage in a Mac mini enclosure, and recently, devs are benchmarking the new DTK although they aren’t supposed to. Comparing the score with an x86 CPU won’t be a fair battle, so instead, it is compared with another ARM-based Microsoft’s custom SQ1 chipset seen in the Surface Pro X.

Like the A12Z Bionic, the SQ1 chipset is also manufactured on a 7 nm process and has 8 ARM Cortex cores. These 8 cores are evenly split across performance and power-saving clusters on both of the chips, but the SQ1 has cores that can reach higher clock speeds because it was made for notebooks.

The SQ1 chipset has lower TDP and fewer GPU compute units than the A12Z Bionic, with higher FP32 floating-point performance. Now, as we see in the benchmarks, the Apple chip has better single-core scores but the SQ1 chipset leads marginally with respect to multi-core performance. This scene is prevalent in both Geekbench 4 and 5 benchmarks.

Not to forget, that the comparision is with the retail unit of Microsoft Surface Pro X against the DTK which features the A12Z Bionic running on the new macOS 11 Big Sur, which is still is in Beta phase and with more optimizations for ARM-based SoCs, performance should improve over the time. Also, a powerful Apple SoC can also be in development that can be used when this transition gets over i.e. finalized or even before that.