Barcelona vs Atletico Madrid: How to watch the 2019-20 LaLiga match live in India? 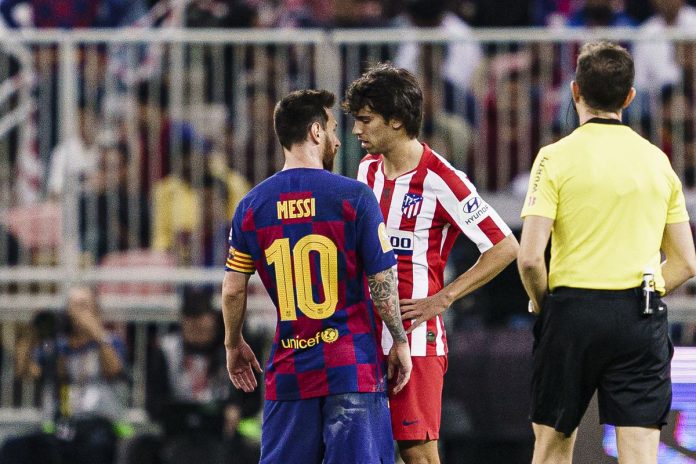 As the season resumed on 11th May, Barcelona had a 2 points lead over their arch-rivals Real Madrid. Straight-forward to 5 matchdays, Barcelona are 2 points behind Real Madrid. It has been a not-so-good run for the Blaugranas after the Coronavirus break.

After winning the first 3 matches, Barcelona drew their last two matches with Athletic Club and Celta Vigo. After the draw with Athletic Club, they were still on level points with Real Madrid, though Madrid was ahead on the league table courtesy of better head-to-head record this season.

But the late Iago Aspas’ freekick goal to draw the match has hurt Barcelona too deeply. They now sit 2 points behind league leaders Real Madrid. In this situation, the team you want to face the least is Atletico Madrid. Simeone’s team knows how to defend and with Oblak, under the bars, their goal is pretty much secured.

Atletico is on also a fine run of form. They were in sixth place when the season resumed but have won all their five matches and now sit in third place. They have only conceded 23 times in 32 games and will surely give Barcelona a lot of headache.

If Barcelona drops any further point in this match, their title race seems to be over as Real Madrid aren’t showing any signs of slowing down. They have won all of their five matches with Zidane rotating the squad very nicely.

So this seems to be a do-or-die match for Barcelona. On the other hand, Atletico will look to upset the reigning champions to give their neighbour club, Real Madrid a very good chance of lifting the LaLiga trophy.

Barcelona will be without the services of injured duo Ousmane Dembele and Frenkie De Jong, although Sergio Busquets will return having missed the weekend 2-2 draw at Celta Vigo through suspension. Atletico Madrid has defenders Mario Hermoso and Sime Vrsaljko injured, along with Stefan Savic and Koke both suspended.

When is the Barcelona vs Atletico Madrid LaLiga match?

The LaLiga match between Barcelona and Atletico Madrid will be played on 30th June, 2020.

What time does the match kickoff?

Which TV channels will broadcast the match in India?

Unfortunately, no TV channels in India will broadcast the match live.

You can watch the live streaming of the Barcelona vs Atletico Madrid match on LaLiga’s official Facebook page.

Previous articleBen Stokes likely to be the new captain for the upcoming test against England.
Next articleOnePlus Nord will be priced under $500, design is shown in new video