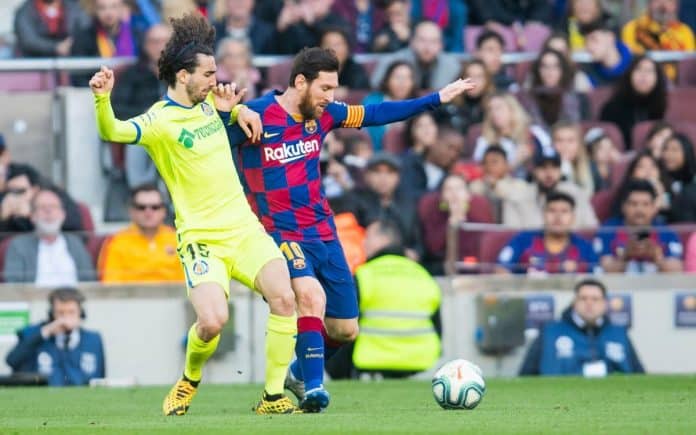 Barcelona announced on Tuesday that Getafe has taken up their purchase option to sign on-loan youngster Marc Cucurella.

Cucurella started his professional career in 2017 at Barcelona but ended up being sold to Eibar two seasons later after failing to break into the senior squad.

But surprisingly, the Blaugrana performed a swift U-turn and triggered the €4 million buy-back clause in the Spaniard’s contract only 16 days after his departure, before sending him directly on loan to Getafe for this current season.

Cucurella has played in all, but one of Getafe’s La Liga matches this season, picking up one goal and six assists along the way. The team had a strong campaign and is currently fifth in the LaLiga table.

It isn’t a major surprise to see him join Getafe permanently, although there were reports suggesting that Barcelona were thinking about bringing the left-back to provide cover for Jordi Alba.

Cucurella has been deployed on the left-wing under Jose Bordalas at Coliseum Alfonso Perez. He would have given a lot of versatility to the Barcelona manager if he returned to the Camp Nou next season. Given the amount of impact he is having at Getafe, selling him just for €10m seems to be a major blunder done by the Barcelona board.

Cucurella has been fairly critical of Barcelona’s treatment of youngsters. He explained in February how he felt the young players do not get the opportunities they deserve in the Camp Nou.

He now joins the list of youngsters Carles Perez, Abel Ruiz in departing this season, while speculation indicates Jean Clair Todibo might be following the exit door as well.

Cucurella had been linked with a transfer to the Premier League earlier this year, with Chelsea allegedly among his possible suitors. Barcelona will get 10 percent of the transfer fee if the versatile left-back decides to switch clubs again in the future.

Marc Cucurella to join Chelsea in £50m+ deal with Brighton