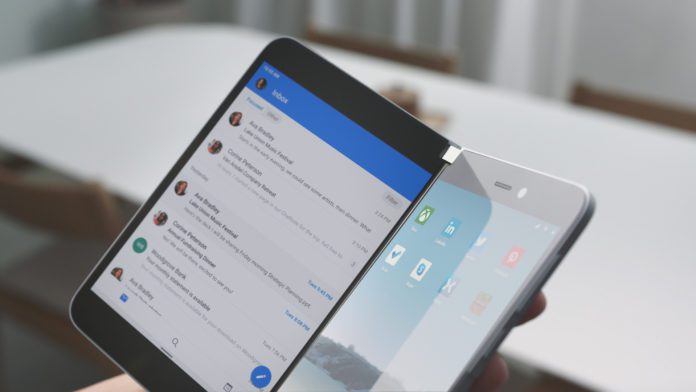 The Microsoft Surface Duo was declared all the way back in last fall for a time period for release around this year’s vacation season. Being based on Android, the Surface Duo’s soul will be the Microsoft launcher that will help to implement various tweaks from the company to make the best use of the dual-screen smartphone.

According to Windows Latest, Microsoft is currently working on another new feature to be named as ‘app groups’, that is going to very similar to apps like Samsung App Pair on Galaxy and Note lineup which will allow you create pairs of applications which you frequently use simultaneously and add a shortcut to them on the home screen to start both at once.

When the Surface Duo was demoed, this feature was shown and so you can easily launch two apps directly into a dual-screen session. You can actually create a group of Edge and communication apps so that you can make the most out of the upcoming Surface Duo.

As for specs, the upcoming Microsoft Surface Duo will feature dual 5.6-inch AMOLED displays and will be powered by the Qualcomm Snapdragon 855 chipset. It is supposed to feature a 3,460mAh battery and run on Android 10 out-of-the-box along with an array of useful features and integrations by Microsoft, this unique smartphone is rumoured to be launched as soon as next month.

Share
Facebook
Twitter
Pinterest
WhatsApp
Linkedin
Previous articleNeed for Speed: Hot Pursuit to be making its way back in a Remastered Edition
Next articleSarpreet Singh becomes the first Indian-origin player to win the Bundesliga title