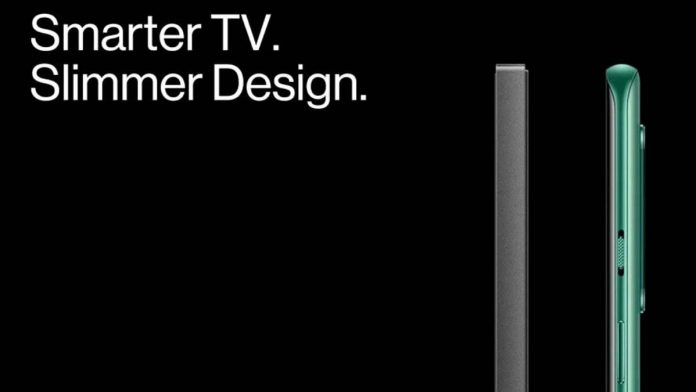 Pete Lau, co-founder, and CEO of OnePlus revealed in an interview that their upcoming smart TV will be much thinner than its current OnePlus 8 series. He mentioned that the upcoming OnePlus TV featured a 6.9mm ultra-thin body which turns out to be thinner than the OnePlus 8 series smartphones. He also added “50 percent deeper bass.” It is now official that OnePlus will launch the new series of Smart TV on July 2 and will be available via Amazon. Previously we have also heard from the officials that this is going to be an affordable smart TV series and may start from less than Rs. 20,000.

Pete Lau told Android Central that the upcoming budget-friendly smart TV will have 95% screen to body ratio and he also added that the speakers had an innovative acoustic arrangement where they were rotated by 90 degrees, which allowed the developers to add two large full-sized speakers in the TV resulting in a 50% deeper bass.

“Creating the unique carbon fiber back for the new OnePlus TVs is a great example of the attention we give to little details that make up a whole, ensuring premium quality,” the OnePlus CEO told Android Central. This clearly means that the company is trying to some previous designs on the new models as well in order to keep the feel intact.

The upcoming smart TV is reported to come in two different sizes 32-inches and 43-inches. Previously we came across some reports that claimed that these televisions may feature “innovative Gamma Engine” and 93 percent coverage of the DCI-P3 colour gamut. But the CEO has not mentioned any particular feature about this device. These TVs will support Cinematic Display and Dolby Vision, and has preloaded Netflix app.