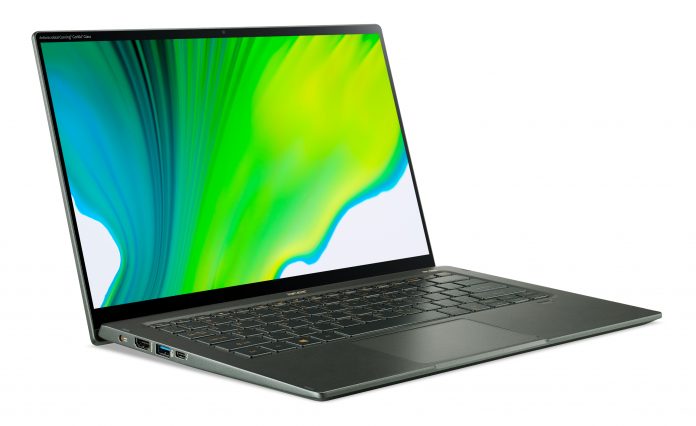 Intel’s Tiger Lake CPUs are coming as a reply to AMD’s Ryzen 4000U mobile chips this year and the first laptop bearing this Intel chip gets officially announced. Acer has announced the latest addition to its Swift 5 series with upcoming Intel CPUs named as the SF514-55 series.

The new Swift 5 SF514-55 will feature a 14-inch FHD display with very narrow bezels and a high screen-to-body ratio of up to 90% (an upgrade from previous 86.4% on older models). The display will have a peak brightness of 300 nits and will come with a touchscreen option covering about 72% of the NTSC colour gamut, also featuring an Antimicrobial Corning Gorilla Glass.

However, Acer will still provide you with optional discrete Nvidia GeForce MX350 GPU as well. This comes paired with up 16 GB of RAM and a 1 TB NVMe SSD. The laptop will be still very thin and sleek, also have a weight under 1Kg.

There remains no change when it comes to ports, the new Swift 5 SF514-55 will have HDMI port, two USB 3.2 Gen 1 ports, a USB Type-C Thunderbolt port, and a 3.5mm headphone jack. Acer has packed 56 Wh battery into the new Swift 5 and there will be dual-band Wi-Fi 6 connectivity support as well. For security, there’s the Windows Hello support along with a dedicated fingerprint reader.

If the guesses are correct, this laptop was the one that was listed by Dutch retailer a few days ago with Core i5-1135G7 and Core i7-1165G7 CPU options. The new Acer Swift 5 SF514-55 will make its way in China, EMEA and North America from October onwards with a starting price of CNY 6,999, €1,099 and US$999.99 respectively. In the images we see, probably we will see two colour variants of the laptop.

Previous articleFIFA 21: Amazon starts accepting pre-orders
Next articleSanjita Chanu will finally get her 2018 Arjuna Award after being cleared of doping charges

This Acer TV will be available at Rs.39,999 with 55-inch 4K UHD screen and Dolby Support