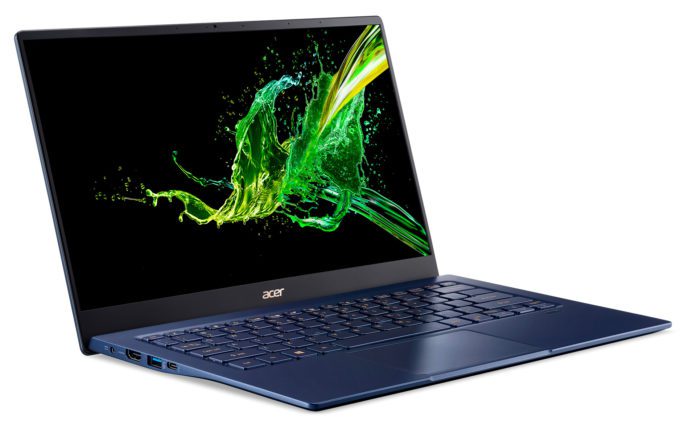 Two models with Core i5-1135G7 and Core i7-1165G7 CPUs which again seems to be quad-core and eight threaded. The more exciting part about the Tiger Lake architecture is that it is the combination of Willow Cove CPU cores and Gen12 Xe integrated graphics. However, it will interesting to how these quad-core CPUs perform against AMD’s strong Zen 2 based APUs with up to 8 cores.

The Acer Swift 5 seems to feature a 14-inch FHD resolution touch panel along with the presence of Intel Wi-Fi 6 AX201 and Bluetooth 5 connectivity, as well as a fingerprint reader and Windows 10 Pro pre-installed.

Nevertheless, the prototype Tiger Lake Graphics processor performance places this model is on par with low-end NVIDIA distinct graphics like GeForce MX350. However, a more powerful Ryzen 7 4800H and GTX 1660 Ti-powered laptops like the ASUS TUF Gaming A15 can be had for less.

The major difference or key USP of the AMD APUs is its cheap pricing because a Ryzen 5 4500U or a Ryzen 7 4700U will have far less pricing than these costly Intel Tiger Lake counter parts. So, when it comes to price-to-performance ratio, AMD can still hurt Intel, however the blue team seems to be making a huge leap in integrated graphics this time which AMD should be wary of.

Nonetheless, considering that it is a low-profile Tiger Lake equipped 14-inch ultra-thin notebook, the upcoming Acer Swift 5 should provide a fantastic balance of gaming and productivity-oriented performance. In the weeks and months to come, we must see more Tiger Lake equipped parts and get a better idea of how Xe iGPUs perform in real-world conditions.

Previous article“Made in India” app: A barcode scanner to let you know if the product is Made in India or not
Next articleThe Best Smartphones of 2020