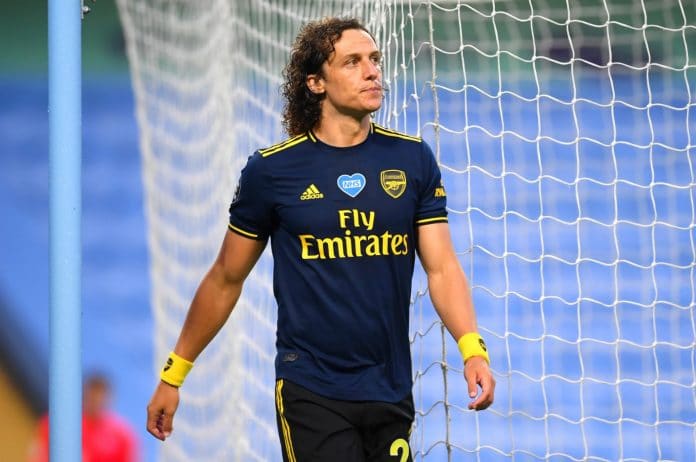 Premier League finally resumed yesterday with Aston Villa playing out a barren draw with Sheffield United. The other match was between Manchester City and Arsenal.

Many thought Mikel Arteta’s team would come fresh after the break. But it was the same old rusty Arsenal against a well-oiled Pep Guardiola’s Manchester City. City blew Arsenal away by a 3-0 scoreline.

The match could have been different only for David Luiz. Although he started the match sitting on the bench, he had the most impact among all the Arsenal players.

Arsenal lost Xhaka early in the match due to injury. When again, Pablo Mari was injured on 24th minute, Arteta brought on Luiz. The experienced campaigner was brought on to give a cool head to Arsenal’s defence. But the move backfired and he created an unwanted Premier League record.

Just before half-time, the ball came of Luiz’s knee to fall nicely for Sterling, who didn’t make any mistake to slot the ball home. This incident was still acceptable as all the players have been back after a long 3-month layoff.

Again, just after the half-time break, on 50th minute David Luiz needlessly fouled Mahrez inside the penalty area and as a result, conceded a penalty as well as saw a red card. This was the 4th penalty David Luiz has conceded this season, equalling the Premier League record.

David Luiz’s contract with Arsenal runs out this month but there is an option to extend it by a further 12 months. Yet Luiz expressed his frustration at a lack of clarity over whether the Gunners will activate that option.

Luiz said after the loss to Manchester City: “It’s my fault. The team did well, especially with 10 men. The coach is amazing, all the players are amazing, it was my fault. I want to be here. The coach knows. He wants me to stay.”

He told Sky Sports: “I should have taken a different decision in the last two months but I didn’t. All about my contract, if I stay here or not. I have 14 days to be here and that’s it. I should have tried to decide my future as early as possible, but I didn’t.”

“I don’t want to use that as an alibi or excuse, it’s my fault – that’s it. I love to be here. That’s why I continue to train hard.”

What a miserable night it was for Arsenal, all credits to Manchester City and Arsenal’s off the field decisions!

Previous articleAcer One 14 entry-level laptop launched in India at just Rs. 22,999
Next articleConfederation of All India Traders to boycott all Chinese goods