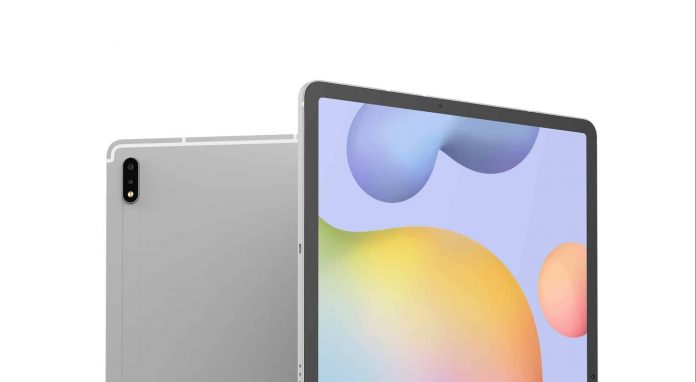 Previously we have seen the images of Samsung Galaxy Tab S7, the upcoming Tab S series from Samsung and recently a few days ago the Plus version of the series has passed through Geekbench and revealed some key specs of the device. Not to mention a trustable source Pigtou in collaboration with Steve from @onleaks has got their hands on some images of the Plus version as well.

The images of Galaxy Tab S7+ shared by Pigtou, seem pretty much the same as the vanilla version of the series. The dual cameras at back are the same and the same design all around, there would not be any change in the design in this version also. Only the change that ill be noticed in this version would be its screen size that would be similar to the 12.9 inch iPad Pro from this year. There would be a Type-C charging port at the bottom and two speaker grills on both sides of the charging port.

Specifications as far as we know:

As far as we know, the Galaxy Tab S7+ would have a 12.4-inch display with a 120Hz refresh rate. The benchmark database lists the motherboard on the Galaxy Tab S7+ as “Kona”, which corresponds to the Snapdragon 865 SoC, which will be a 1.80GHz. This indicates the previous rumors that pointed towards the Snapdragon 865 processor on this tablet. There will be confirmed dual-camera around the back, and a third hole which resembles some kind of sensor or maybe a third camera. But the front camera has been shifted to the side bezel and will be more useful while held in landscape mode. The device would pack a huge 9,800mAh battery.

According to the source, the Samsung Galaxy Tab S7+ has a rough dimension of 285mm in length, 185mm width, and 5.7mm thickness. But sources claim that the Plus version will be slimmer than the vanilla version and the thickness may go up to 6.9mm if the camera bump is included, still thinner.

The Tab S7 series would support magnetic S-pen that will stick to the body of the device when needed. There is not much details available for the S-pen.

From all the specifications that surfaced in favor of the Galaxy Tab S7+ can be compared to the iPad Pro and so we can also anticipate the price range of the device. A high-end tab with some high-end price points. However, there is no official news about the price of the device but the company is expected to launch the device by next month.