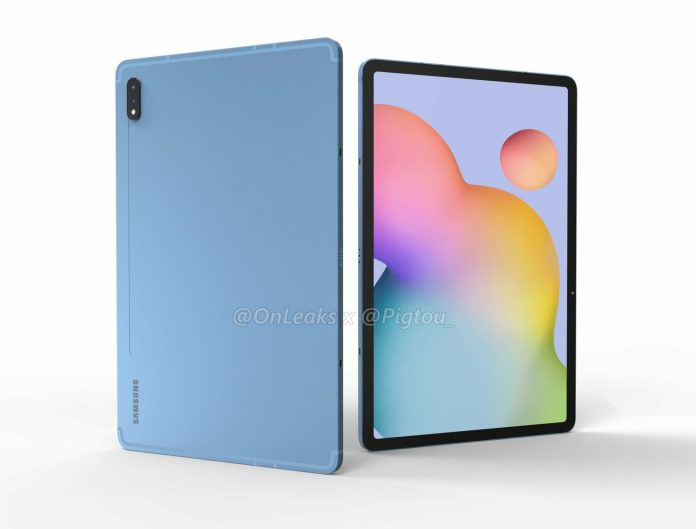 Samsung’s Galaxy Tab S6 Lite recently launched in India and now from leaked renders, it seems the South Korean giant’s next tablet is already in works. Thanks to @OnLeaks and Pigtou for the leaked renders, we actually get the design of the upcoming flagship tablet by Samsung.

As because the leaks of both the sources are quite accurate, you can actually count on the leaked renders and get a overview of the upcoming device.

As per the leaked renders, the Galaxy Tab S7 will be around 253.7 mm long, 165.3 mm in width and 6.3 mm thick. This tablet is slightly larger than the 2020 iPad Pro and also thicker than Apple’s flagship tablet, also if you do notice the overall design and aesthetics look very similar to that of the Samsung’s previous tablets.

However, the Galaxy Tab S7 seems thicker if the rear camera module included, in fact, increasing the thickness to 7.7 mm. Also, we see that there’s a dual-camera at the rear end along with flash and the bezels at the edge of the display are quite big. The Samsung logo is at the back of the device, parallel to the camera module.

The facets seem to be quite thin and have a completely metallic case, also, there are antenna lines around both the top and bottom of the back of the tablet. Apart from design, some technical details have also been revealed including an 11-inch display and a huge 7,760 mAh battery.

A 360-degree render of the device is seen, however this may not be the final device that we are seeing but gives us a fair idea of it. The Galaxy Tab S7 is speculated to support 5G connectivity, at least in the US and Europe and they are supposed to be launched in July of this year with a price tag ranging from $650 to $700.