Juventus vs AC Milan: How to watch the second leg of the Coppa Italia semi-final live in India? 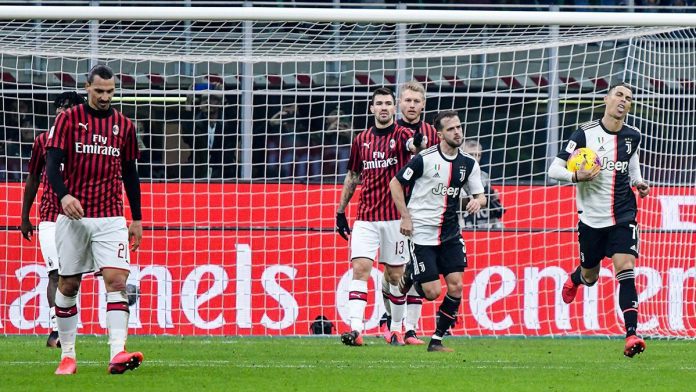 Italian football is finally about to resume after a long lay-off of 3 months due to the Coronavirus pandemic. The 2019-20 football season will kick off by the second leg of the Copa Italia semi-final clash between Juventus and AC Milan.

The first leg of the semi-final between the two Italian giants ended in a 1-1 draw. Ante Rebic scored the opening goal in the first leg for the hosts back in February but Cristiano Ronaldo scored a vital last-gasp penalty to earn a crucial away goal on the night. The winner of this semi-final will book a berth in the Coppa Italia final which will be played on 17th June, at Stadio Olimpico, Rome.

When is the second leg of the Coppa Italia semi-final between Juventus and AC Milan?

The second leg of the Coppa Italia semi-final between Juventus and AC Milan will be played on 12th June, 2020.

Where will be the second-leg played?

The Juventus vs AC Milan second-leg match will be played at Juventus’ home ground, Allianz Stadium.

OFFICIAL | Our #CoppaItalia semi-final second leg vs Milan will be played tonight at 21:00 CEST.#JuveMilan #ForzaJuve

Which TV channels will broadcast the semi-final live in India?

Unfortunately, no TV channels will broadcast the semi-final clash live in India.

Another unfortunate moment for the Indian fans! There is no live streaming partner in India as well.