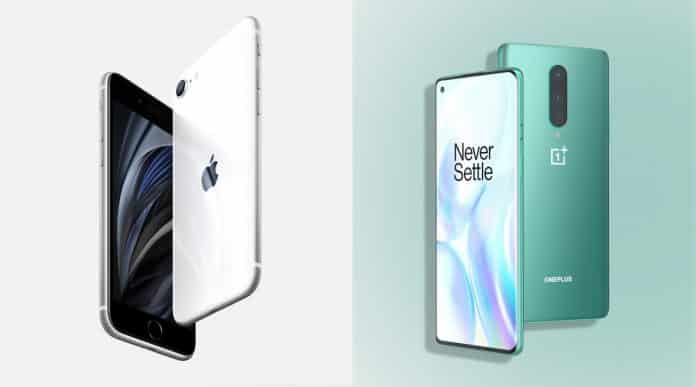 Apple iPhone SE (2020) was launched earlier this month and the OnePlus 8 5G along with the Pro version was launched in the previous month. Both the smartphones are priced above the Rs.40,000 range. To be exact the Apple iPhone SE (2020) is the advanced version of the previously launched SE model priced at Rs.42,500 and the OnePlus 8 is the vanilla version of the series priced at Rs.41,999.

In this case, both the smartphone’s prices are almost equal. Many of the iPhone fans want to buy this on the other hand OnePlus fans were also waiting for the 8 series. Now as both the top-notch smartphones are available in the market let’s see which one to chose and which one will be the best among these two.

Let’s have a look at the key features of the smartphones then let us move into the final decision.

Coming to the display, iPhone SE features a smaller display than the OnePlus 8 and the refresh rate of the later is also greater. So in case of screen size and display focusing the OnePlus is more powerful. But those who love a smaller screen can go for the iPhone device.

The camera also plays a major part in this discussion. The iPhone SE comes with a single rear camera and a selfie camera at the front. Whereas, the OnePlus 8 features a very powerful triple rear camera setup including a selfie camera that is housed in the punch hole cut on the display. The resolution details are in the specification mentioned above. The main point is in real life the OnePlus camera will be more powerful and real than the other one.

Both the smartphones come with almost similar storage and both of them use flagship chipsets. The iPhone uses Apple’s latest flagship A13 Bionic chipset whereas, OnePlus 8 is powered by Snapdragon’s flagship chipset. OnePlus 8 runs on Oxygen OS based on Android 10, but there’s no competition against Apple’s legendary iOS with insane software optimizations and software updates for the next 5 years.

Now coming to the battery the OnePlus features a grater battery than the iPhone. Another important thing is that OnePlus 8 comes with a 5G connectivity whereas the iPhone SE still supporting 4G connectivity at this price range. At the end of the day, only the price range will talk and fans may have some different opinions as well.

Now coming to the gaming section, if you think which one will be a better choice for playing any game, then obviously a gamer will go for OnePlus. Because the only disadvantage iPhone SE has for gaming is that its compact screen size, whereas, OnePlus 8 features a very mesmerizing screen size with a very small punch-hole cut for the front camera and gives an amazing view for playing games. In addition to that, the AMOLED screen of OnePlus 8 supports a 90 Hz refresh rate which makes it even more smooth to run your fingers on the screen. The large battery capacity of OnePlus is also another plus point for gaming.

So from this, you can say OnePlus will be a good choice in this price range. But there is also some plus point for the Apple device, that supports wireless charging and IP67 water resistance which is an addition to the wonderful device. So now you can also say that iPhone may be a good choice as it is a compact beast as well. But overall this is a very close call because Apple will give you the brand support and OnePlus will give you everything you need in a flagship-level device. iPhone fans have a great chance to grab this smartphone as it features the flagship chipset and great camera experience at such a price. The choice depends on the user because it depends on their personal requirements.