Samsung Galaxy M01 and M11 launching on June 2 in India 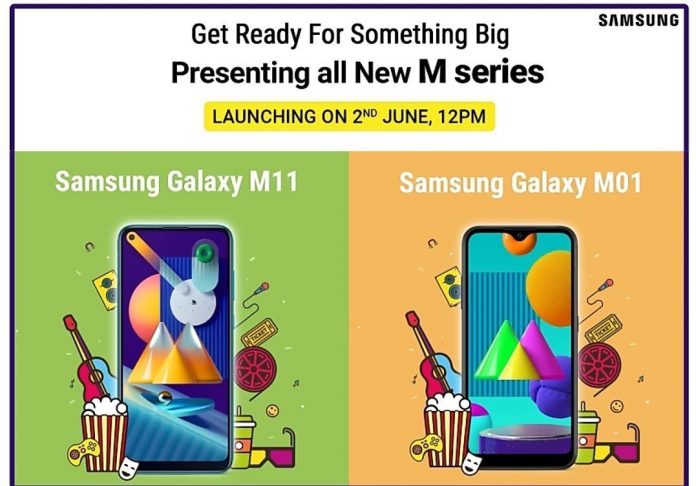 Samsung is holding an event on June 2 at 12 pm. The event will focus on the launch of the Galaxy M01 and M11 smartphones and will be an online event. Samsung has also revealed some of its key specs of both the devices. With this announce we can also expect the online listings of these smartphones. These the lower mid-range smartphone of the lineup and the M series lineup is all about mid-range devices.

Earlier reports claim that the Galaxy M01 would come with a 5.7″ HD+ (720×1,560 pixels) display with a waterdrop-style notch and a 19:9 aspect ratio. Flipkart teaser reveals that the phone comes with a dual rear camera setup that includes a 13MP primary sensor and a 5MP selfie camera. There is also a 4,000mAh battery. The phone is also said to have an octa-core Qualcomm Snapdragon 439 SoC, paired with 3GB of RAM and 32GB of onboard storage.

Flipkart’s teaser shows the display and battery details of the Samsung Galaxy M11. Nevertheless, we have detailed specifications through the earlier launch in the United Arab Emirates (UAE) market. Samsung Galaxy M11 will feature a 6.4″ HD+ (720×1560 pixels) display with a hole-punch design and is powered by an octa-core SoC, paired with up to 4GB of RAM. The phone comes with a triple rear camera setup that includes a 13MP primary sensor with an f/1.8 lens and a 2MP depth sensor with an f/2.4 lens. There is also a 5MP wide-angle shooter that has a field-of-view (FoV) of 115 degrees and an f/2.2 aperture. For selfies, the handset offers an 8MP camera sensor at the front along with an f/2.0 lens. The Galaxy M11 comes with microSD card support to enable storage expansion up to 512GB. Connectivity options on the phone include 4G, Wi-Fi 802.11 b/g/n, Bluetooth 4.2, and GPS/ A-GPS. There are a rear-mounted fingerprint sensor and a 5,000mAh battery that supports 15W fast charging.