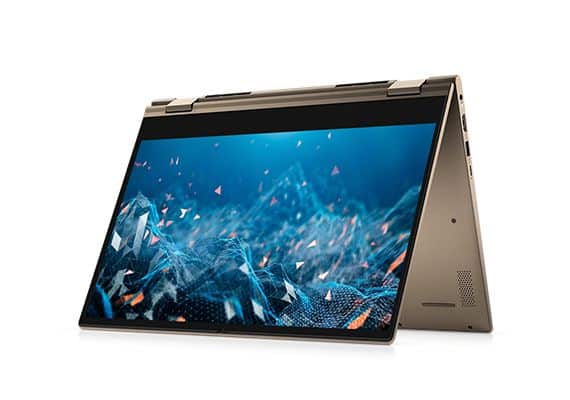 These days OEMs are not only including their favourite Intel CPUs onto laptops, but also considering the new AMD Ryzen 4000 Renoir APUs. Being based on 7nm process, these processors give similar or even better performance than Intel ones at lower price point.

Dell has launched a wide range of laptops recently and to add to that, they have launched the new Inspiron 14 7000 2-in-1 laptops. When compared with the Intel-based Inspiron 13 7000, the AMD powered variants have been shown injustice by the OEM.

The laptop features 14.0-inch FHD (1920 x 1080) IPS LED-Backlit Touch Display along with a sleek and premium design. It comes with an aluminium top cover and palm rest that features diamond-cut edges around the trackpad. This 2-in-1 laptop features active pen compatibility to draw your imagination and creative works.

Also, there’s a Fingerprint Reader along with HD camera with webcam privacy shutter and a dark grey backlit keyboard which matches with the Sandstorm colour of the 2-in-1 laptop. On the connectivity front, we have Intel Wi-Fi 6 AX200 2×2 (Gig+) as well as Bluetooth 5.0 options.

For the ports, we have 2 USB 3.2 Gen 1 ports, 1 USB 3.2 Gen 1 (Type-C™) port, 1 headset (headphone and microphone combo) port along with an HDMI 1.4b port and an SD-card slot. Dell has included just a 40WHr battery with ExpressCharge support that charges your battery from 0% up to 80% in an hour.

Some features like built-in dual voice assistants – Cortana & Alexa along with Dell Mobile Connect makes this easier for you to experience a seamless automation and productivity. With just 1.55kg weight, this is an ideal portable and powerful 2-in-1 laptop to have.

There are no 16 GB RAM options, the Ryzen models have a lesser battery, no dual-channel memory support. Dell has obviously made a great productive laptop but still, there are some flaws on AMD variants which they need to obscure, but indeed the Dell Inspiron 14 7000 2-in-1 laptop is an ideal AMD Ryzen 4000 powered 2-in-1 laptop to go for.

Head over to Dell Store to buy it.

Previous articleXiaomi RedmiBook 13, 14S, 16 with Ryzen 7 4700U spotted on 3DMark
Next articleNew SD Express 8.0 announced, up to 4 GB/s transfer speeds