De Jong touted as ‘a great successor to Busquets’ at Barcelona 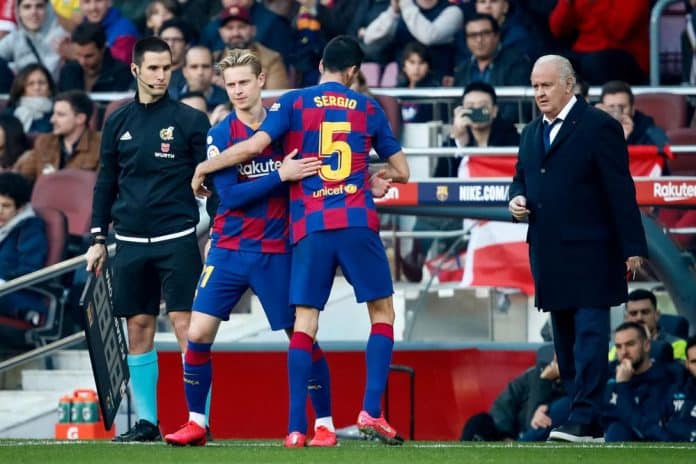 Frenkie De Jong joined Barcelona for a reported €75million last year. He impressed in his last season as Ajax. He was a key member of the Ajax team which made a dream run to the Champions League semi-finals, beating the likes of Real Madrid and Barcelona.

De Jong didn’t have the same amount of influence on games at Barcelona as he did at Ajax. He has faced many criticisms at Camp Nou.

Former Barcelona player Ronald De Boer, who won the LaLiga title with Barcelona in 1998-99, believes De Jong has adapted well to life at Camp Nou. He insisted it is better comparing him to Busquets, who is regarded as arguably the finest holding midfielder of his generation. De Jong would be ‘a great successor to Busquets’.

De Boer told BarcaBlog: “People said he didn’t reach the level he reached with Ajax last season in Europe or with the national team. But not everyone can say that they play so many minutes with such a strong team, so I think he’s doing well.”

“You see how another young player like De Ligt had a harder time, while everyone thought he would play regularly from the start. He is doing very well when you consider that this is his first season.”

“If he’s going to play as a central midfielder, I’m sure he’ll be successful. He is a controller, you should not ask him to score 20 goals, he is not such a player.”

“I am sure he will be a great successor to Busquets in the future.”

De Jong has scored two goals in 37 games till now this season. It’s not about the number of goals he scores but it is about the influence he has on the midfield for Barcelona.