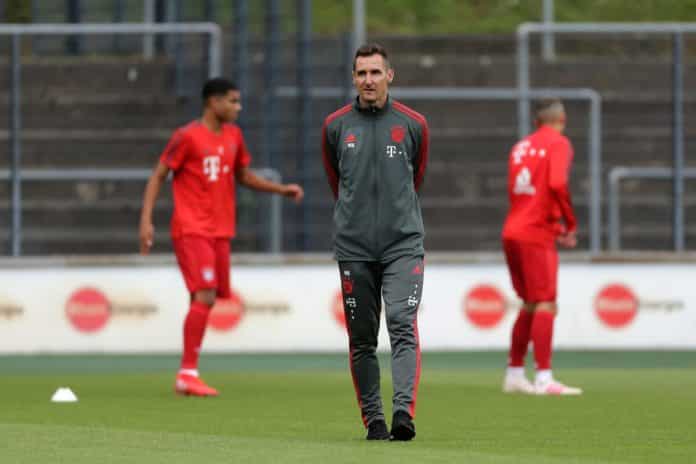 Miroslav Klose is a legend of German football. He has inspired a whole generation of strikers. He won the 2014 World Cup for Germany. He has also reached the finals of the 2002 World Cup and Euro 2008.

Klose is the leading goalscorer in World Cup finals history with 16 goals. He won the Golden Shoe at the 2006 World Cup, which was hosted by Germany.

Klose played four years at Bayern Munich. During his time at the Allianz Arena, he has won two Bundesliga and DFB-Pokal doubles. He retired in 2016.

He has signed a one-year contract and will move into the role from 1st July. He will be an assistant to head coach Hansi Flick. He has been coaching Bayern Munich’s under-17 side for the last two years and has now finally stepped into the first team role.

Miroslav Klose said: “Hansi Flick and I have known each other very well since our years together with the German national team, we trust each other both professionally and personally.”

“For me, this is the next step in my career as a coach. I hope that with my experience I can make an important contribution to Bayern achieving its sporting goals.”

Hansi Flick said: “With his experience as a former professional at the highest international level, Miro is the perfect addition to our team of trainers.”

“We have known and esteemed each other for a long time and have had great success together with the national team. The fact that Danny Rohl will remain with us in the long term is also great news for my team and me.”

Previous articleBBC Sport has revealed their Premier League Player of the season
Next articleMi Commerce: Lets You Order Xiaomi Devices from Local Stores & Get it Delivered