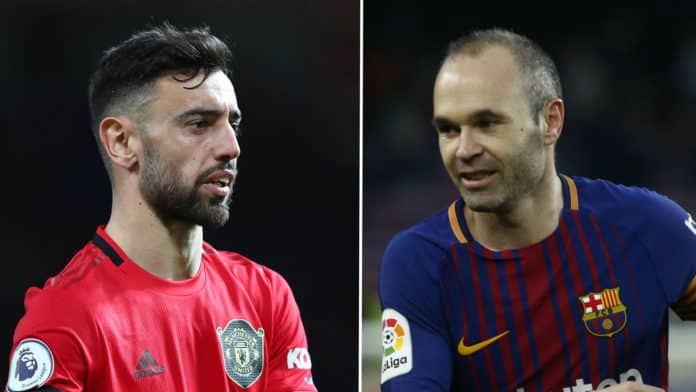 Manchester United signed Bruno Fernandes in January 2020 from Sporting CP. The Portuguese international has adapted to the Premier League like he was born to play in this league for United.

Fernandes has told that he followed Barcelona great Andres Iniesta and has attempted to model his game around him. He also idolised another Barcelona player Ronaldinho along with his countryman Cristiano Ronaldo.

Bruno Fernandes told United’s official website in a question and answer session: “The one I liked to watch and follow was Iniesta because Iniesta is a mix between an eight and a 10. It is the way I can play better, between eight and 10. It is the guy who always likes to have the ball, take the risks, and I think Iniesta was one of the best in the world.”

“How Iniesta finished his career without the Ballon d’Or, with everything he won, it is difficult for me to understand!”

Fernandes further added: “I have a lot of players I like to see. For example, in my first few years, the player I think is the one everyone liked and always will like is Ronaldinho.”

“For me, he is the player with the capacity to take you and put you in front of the TV, and you will stay for hours. For hours! Because he had that energy and happiness. He was happy in everything he did. You enjoy it when you see guys playing like that, so for the first few years, Ronaldinho was my favourite player.”

“After this, I have already said that Cristiano Ronaldo is one of the players. As a professional player, he is the best you can follow.”

Bruno Fernandes and Pedri: The new No 8 of their clubs

Top 5 most expensive attacking midfielders in the world in 2022