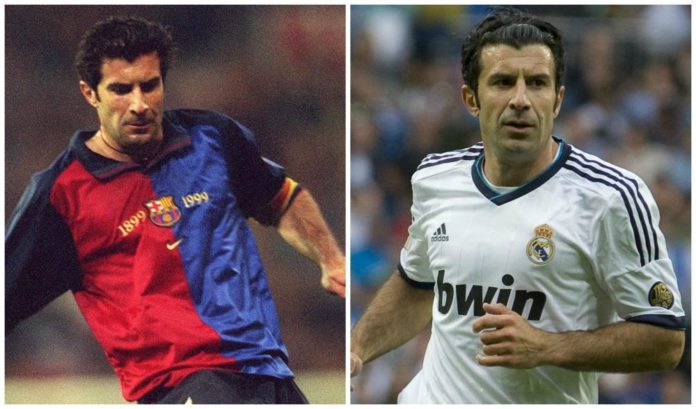 Barcelona and Real Madrid are eternal rivals on the field. They are two of the most successful European clubs. Their legacies are almost unparalleled.

Portuguese international Luis Figo played for Barcelona in the late 1990s. But he dared to join their rivals Real Madrid in 2000. It was a very surprising move as he crossed the El Clasico border. Los Blancos signed him for a then world-record fee of £37.2 million.

Figo has claimed a lack of “recognition” was behind his decision to leave Barcelona and join Real Madrid in 2000.

As reported by Marca, he said: “It was an important but difficult decision. I left a city that gave me a lot and where I felt good.”

“But when you don’t feel like you’re recognised for what you’re doing and you have an offer from another club then you think about it.”

Figo spent five years at Santiago Bernabeu before joining Inter. He played alongside club legend Raul Gonzalez, whom he admired very much.

He said about Raul: “Raul is a winner. It’s because of his mentality that he won so much in his career. He always knew what to do and how to move on the pitch.”

“I played with a lot of great players; Ronaldo, Zidane, Rivaldo, [Hristo] Stoichkov, Guardiola, [Fernando] Hierro, [Juan Sebastian] Veron. But I would always back Raul to score.”

Figo spent the most successful years of his career at Real Madrid. He won the 2000 Ballon d’Or and 2001 FIFA World Player of the Year as a Real Madrid player.