Hazard reveals how Drogba convinced him to join Chelsea in 2012 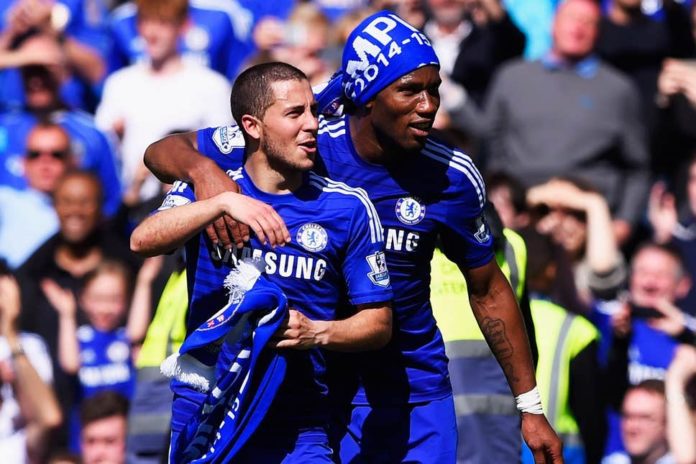 Eden Hazard joined Chelsea in 2012 from Lille. The switch to the Premier League helped Hazard to become one of the best players. He has won two Premier League trophies with Chelsea before leaving Stamford Bridge in 2019 to join Real Madrid.

Hazard has now revealed that he wasn’t sure whether he wanted to join Chelsea. There was doubt surrounding his next club in 2012. Manchester City and Manchester United were also interested in the Lille forward.

It was Didier Drogba who convinced Hazard to join Chelsea in 2012. Hazard told: “Suddenly Gervinho’s phone rang in our the dressing room. It was Drogba on the line. He insisted on passing the phone to me, ‘I need to talk to him’.”

“Drogba said to me, ‘You have to come to Chelsea’. At that moment I was still in doubt. Chelsea were not doing that well in the Premier League. They wouldn’t play Champions League the following year.”

He added: “[But] After that [Champions League] final, the choice was made quickly. I knew I would easily adapt. London, close to home, not far from Lille. De Bruyne had just signed, Romelu was around.”

“There were enough French speakers. I knew I would play enough. I was only sad that he, Drogba, decided to leave. Luckily he came back for one season.”

Since joining Chelsea, Hazard’s career has gone off to a flyer. He hasn’t looked back. He spent seven very successful seasons at Chelsea. Along with two Premier League titles, he also won two Europa League trophies.

Hazard has now joined Real Madrid in a bid to become the best player in the world. He would hope to win the Champions League and finally win the Ballon d’Or one day to get the deserved recognition for his talent.

Previous articleWi-Fi 7 incoming with a speed of 30Gbps!
Next articleNeymar breaks down in tears sharing his days at Barcelona alongside Messi