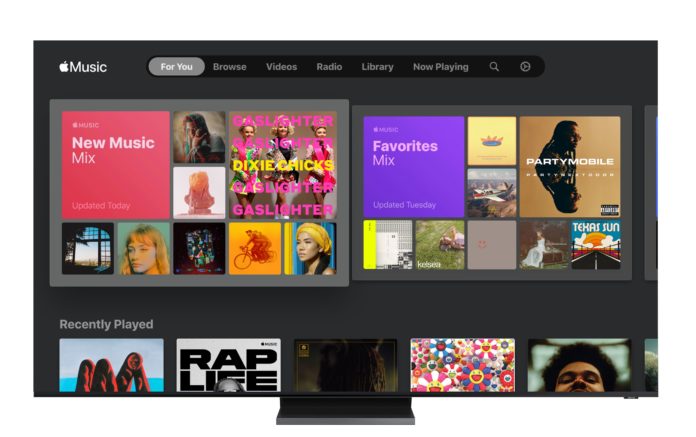 After Samsung promised to bring the Apple Music to its Smart TV models launched in 2018 or later. Now it is available for select models and the company in a press release claimed that it is the first TV brand to integrate Apple’s music streaming service on its Smart TV platform.

Even though Samsung is the arch-rival to Apple in smartphones and various other sectors, the South Korean giant is the leading TV manufacturer in the world. To modernise their Smart TVs it has integrated the Apple Music into a few of their Smart TVs.

This feature has just started rolling out via an update, this will enable consumers in more than 100 countries to enjoy Apple Music on their Samsung Smart TVs, according to the company. You can stream over 60 million songs ad-free, watch top music videos, and explore thousands of playlists curated by world-class music experts and tastemakers.

So to enjoy Apple Music, you have to download the Apple Music app from the Samsung Smart TV App Store. You can either sign in to an existing account with your Apple ID or begin a new subscription from the TV itself.

New subscribers are entitled to get the service free for 3 months with an individual, family or student subscription. To make things sweeter for you, Apple Music users on Samsung TVs will have access to all the features of the service.

This includes ‘For You’ playlists, videos and radio stations such as Beats 1, that offers exclusive shows by artists like Frank Ocean, Nicki Minaj, The Weeknd, DJ Khaled and Elton John.

You can stream the latest ‘At Home With Apple Music’ content, which includes playlists and interviews crafted “to help create a sense of connection and community during this time of distancing”, said Samsung.

“Our goal has always been to deliver the best entertainment experiences to consumers – and as people spend more time at home, we are more committed to that mission than ever,” said Salek Brodsky, Vice President of Strategic Partnerships and Business Development for Samsung Electronics.

“Last year, we were the first TV manufacturer to offer the Apple TV app, and today, we are the first to offer Apple Music. Our partnership with Apple has been instrumental in bringing consumers an unparalleled lineup of different entertainment options, especially as they seek out more content choices from their Smart TVs.”

Samsung was the first TV brand to offer the new Apple TV app on its televisions in May 2019. Also, Samsung Smart TVs brought support for Apple’s AirPlay 2 feature that lets you wirelessly send audio and video to the TV screen without a set-top box.

Previous article
POCO F2 Pro can be the rebranded Xiaomi Redmi K30 Pro, spotted in Google Play listing
Next article
FIFA proposes teams will be allowed to make 5 substitutions when football restarts after the Coronavirus pandemic