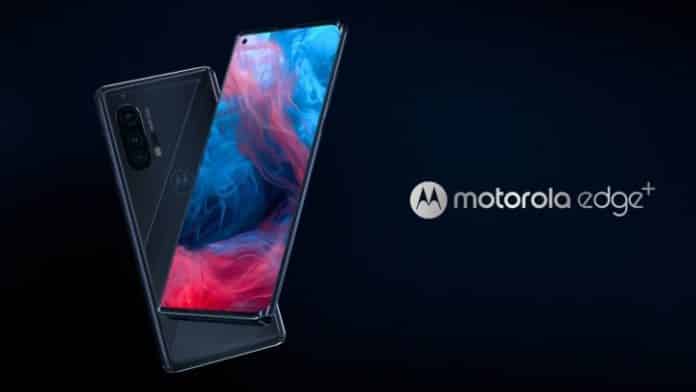 After so many leaks and renders the Motorola Edge series, comprising of Edge and Edge+, is launched today. The series does come with a Waterfall display. The phones are not at all cheap, for a flagship device with all flagship specs. The Moto Edge+ does come with a 108MP camera as mentioned before. The phones flaunt a curved display with hole-punch design and both the devices support 5G connectivity.

Moto Edge 5G features a curved 6.7-inch full-HD+ OLED waterfall display with a 90Hz refresh rate and has an IP54 certified build. Motorola Edge features a 64MP primary camera with f/1.8 aperture and 0.8-micron pixel size. It is accompanied by a 16MP wide-angle camera with an f/2.2 aperture and 117-degree field of view. There is also an 8MP telephoto camera that has an f/2.4 aperture and is capable of delivering a 2x optical zoom. Additionally, it has a ToF sensor on the back. The front camera is of 25MP with f/2.0 aperture.

The device is powered by the Qualcomm Snapdragon 765 SoC that is paired with up to 6GB of RAM and Adreno 620 GPU to handle graphics. It is a dual-SIM (Nano) phone and runs Android 10 out-of-the-box. There is 128GB onboard storage that is expandable via a microSD card (up to 1TB). The new Motorola mid-ranger comes equipped with a 4500mAh battery with support for 18W TurboPower charging tech, but no wireless charging support. Authentication is handled by an in-display fingerprint sensor. The Motorola Edge, it comes in Solar Black and Midnight Magenta shades.

Motorola Edge+ 5G comes with a curved 6.7-inch FHD+ OLED waterfall-display with a 90Hz refresh rate and HDR10+ certification. Motorola Edge+ is equipped with a 108MP primary camera with f/1.8 aperture and 0.8-micron pixel size. The main camera is capable of recording 6K videos at 30fps. It is assisted by a 16MP ultra-wide-angle camera with an f/2.2 aperture and 117-degree field of view. There is also an 8-megapixel telephoto camera that comes with OIS support and provides a 3x optical zoom output. Motorola has also provided a Time of Flight (ToF) sensor. There is a 25MP camera on the front with an f/2.0 aperture and 0.9-micron pixel size.

Previous articleOppo Reno 3A launching soon in India, Specifications tipped
Next articleiQOO Neo 3 5G will have a 4500mAh battery with 44W fast charging