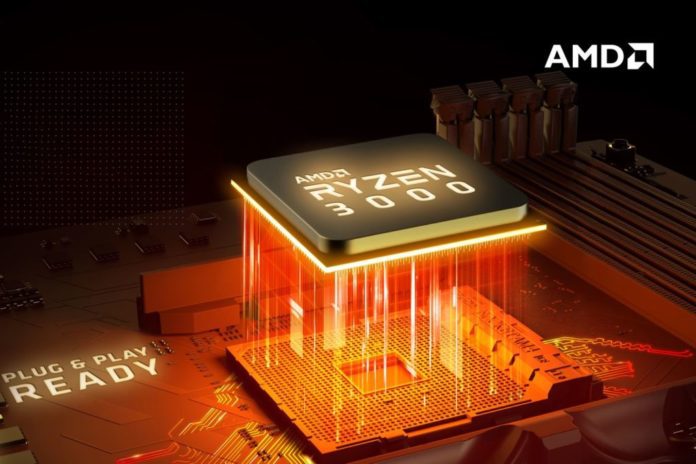 AMD was silent for quite a while in its entry level dekstop CPU lineup, only bringing the APUs to the market. The Ryzen 5 1300 and 1300X were long forgotten and we’re not upgraded to Zen 2, the Zen + based were only confined to the OEMs, but now there are some good news for you all enthusiasts.

The Red team has announced its two new 3rd Gen AMD Ryzen™ Desktop Processors namely the AMD Ryzen 3 3100 & 3300X. AMD is fitting a single CCX module in the die as this is only a quad-core CPU which AMD has taken a lot of time to actually announce.

Both these CPUs are quad-core CPUs with SMT enabled, and with these CPUs, AMD is bringing the groundbreaking “Zen 2” core architecture to business users, gamers, and creators worldwide. AMD has also launched the B550 chipset that brings the speed and bandwidth of PCIe 4.0 to mainstream motherboards which improved overall performance.

The AMD B550 Chipset for Socket AM4 is designed for 3rd Gen AMD Ryzen desktop processors with over 60 designs in development.

With double the threads, twice the bandwidth, and a wide selection of motherboards in development the AMD B550 chipset and Ryzen 3 desktop processors deliver the ideal processing solution from top to bottom. The company has made this announcement in this press release.

“Games and applications are becoming more and more demanding, and with this, users are demanding more from their PCs. AMD is committed to providing solutions that meet and exceed those demands for all levels of computing. With the addition of these new Ryzen 3 desktop processors we are continuing this commitment with our mainstream gaming customers. We’ve taken performance up a level, doubling the processing threads of our Ryzen 3 processors to propel gaming and multitasking experiences to new heights,” said Saeid Moshkelani, senior vice president and general manager, client business unit.

The new B550 chipset for socket AM4 is the latest addition to the AMD 500 Series chipset family with support for the industry-leading AMD Ryzen 3000 Series desktop processors. The upcoming B550 motherboards are the only mainstream modern chipset with compatibility for PCIe 4.0, unlocking twice the bandwidth of B450 motherboards for high-speed, high-power performance in gaming and multitasking.

The AMD Ryzen 3 3100 and AMD Ryzen 3 3300X are expected to be available from leading retailers and etailers worldwide beginning May 21, 2020. AMD B550 motherboards are expected to be available beginning June 16, 2020, from ODM partners including ASRock, ASUS, Biostar, Colorful, GIGABYTE, and MSI at leading retailers and etailers.