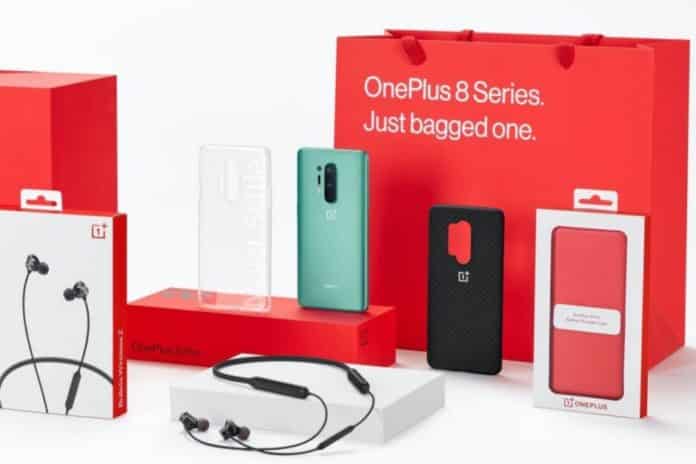 OnePlus 8 series which includes OnePlus 8 and OnePlus 8 Pro is launched today in India. Both the smartphones are launched in an e-event conducted by the company where they also launched the Bullets Wireless Z and OnePlus Wrap Charge 30 in the event. The focused on two smartphones and the new wireless Bullets Z came in a new design and Warp Charge 30 which is a 30W wireless fast charger.

OnePlus 8 runs Android 10 with OxygenOS on top and features a 6.55-inch full-HD+ (1080×2400 pixels) Fluid AMOLED display that has up to 90Hz refresh rate, 20:9 aspect ratio, and a 3D Corning Gorilla Glass protection. The smartphone includes the Qualcomm Snapdragon 865 SoC, paired with 8GB and 12GB of LPDDR4X RAM.

The OnePlus 8 comes in 128GB and 256GB of UFS 3.0 two-lane storage options that aren’t expandable via a microSD card. Connectivity options include 5G, 4G LTE, Wi-Fi 6, Bluetooth v5.1, GPS/ A-GPS, NFC, and a USB Type-C port. Sensors onboard include an accelerometer, ambient light, gyroscope, magnetometer, and a proximity sensor. The phone also has an in-display fingerprint sensor. OnePlus has offered a 4,300mAh battery on the OnePlus 8 that supports Warp Charge 30T (5V/ 6A).

The OnePlus 8 also has dual stereo speakers along with Dolby Atmos sound and the new Haptic Vibration engine. The new smartphone has also retained the alert slider that is a legacy feature in the OnePlus phones — similar to the mute switch on the iPhone.

The OnePlus 8 Pro has the quad rear camera setup that houses a 48MP primary Sony IMX689 sensor — along with an f/1.78 lens that has optical image stabilization (OIS) and electronic image stabilization (EIS) support. The primary camera sensor is accompanied by an 8MP secondary sensor that has an f/2.44 telephoto lens and OIS support, paired with a 48MP tertiary sensor that includes an f/2.2 ultra-wide-angle lens. The camera setup also includes a 5MP “Color Filter” camera sensor that will bring artistic lighting effects and filters, along with an f/2.4 lens. Moreover, the smartphone offers 3x hybrid support and 4K video recording at 30/ 60fps. For selfies, the OnePlus 8 Pro has a 16MP Sony IMX471 sensor at the front along with an f/2.45 lens and 1.0-micron pixel size.

OnePlus has provided a 4,510mAh battery on the OnePlus 8 Pro that supports Warp Charge 30T (5V/ 6A) and Warp Charge 30 Wireless, apart from reverse wireless charging. The OnePlus 8 Pro comes with an Alert Slider to let you easily turn off ringtone alerts. The phone also includes dual stereo speakers that support Dolby Atmos technology and offers Audio 3D and Audio Zoom features. Further, there is an upgraded Haptic Vibration engine that is touted to deliver 11 percent more powerful vibrating effects over what was available on the previous-generation OnePlus flagship.