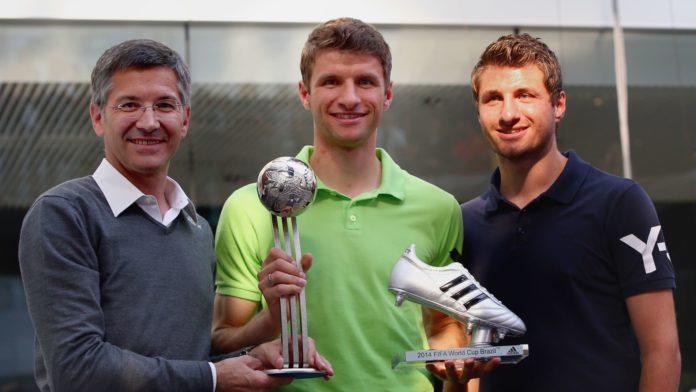 Bayern Munich president Herbert Hainer has compared Thomas Muller to one of Germany’s most famous event, Oktoberfest to signify his importance to Munich.

Thomas Muller has been a one-club man till now. He has spent his entire career at Bayern Munich. He made his debut back in 2008. Since then he has been an integral part of the Bayern Munich team.

The 30-year-old has made 521 appearances for the club. He has scored 195 goals and provided 146 assists till date.

Muller has recently signed a contract extension which will keep him at Bayern at least till 2023. He lost his way in the team under Niko Kovac but after the appointment of Hansi Flick, he has rediscovered his way into the team and once again he is back to his prolific best.

Hansi Flick has been appointed as the permanent manager till 2023 which has probably helped Muller to decide to extend his contract.

Herbert Hainer said, as published on Bayern’s Twitter account: “It is of course very good news and I was incredibly happy when I heard it.”

“Thomas Muller is a hero, a symbol of FC Bayern Munich. He’s spent his entire footballing career here and he’s blossomed once again in recent months under Hansi Flick.”

“He provides so many assists, he’s an outstanding player, and I think that Thomas Muller belongs to FC Bayern, much like Oktoberfest belongs to the city of Munich. And in that respect, that’s really great news.”

He further added: “As head coach of FC Bayern Munich, you will of course be measured by titles and that will certainly be the case with Hansi Flick.”

“But we are absolutely convinced by Hansi Flick. If you look at what he has done with the team over the past few months, he has not only got the team winning, but it’s also about the way the team plays.”

“They play incredibly attractive, great, attacking football, they score a lot of goals and win most games. They’re already so good, but I’m convinced Hansi Flick will continue to develop this team.”