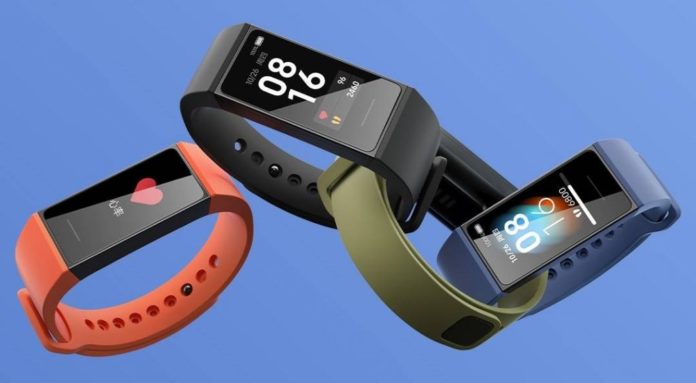 At its 10th Anniversary in China, Xiaomi has announced its budget-friendly wearable under its Redmi branding. The Redmi Band will be cheapest smart wearable ever retaining some of the keys featured that Mi Band 4 comes equipped with.

It features a 1.08-inch colour AMOLED touchscreen and promises up to 14 days of battery life like the Mi Band 4. Like the Realme Band, it also comes with a built-in charging port that plugs into a USB-A port on the charger, laptop or PC, which is quite convenient than their traditional capsule-style band.

The band features a heart rate sensor, sleep monitoring and also comes with activity tracker which can track a lot of sport modes such as outdoor running, treadmills, walking, cycling, and others. You can even set sedentary alerts, reminders, and more because the software remains the same as Xiaomi’s Mi Band 4.

It has a 5ATM (50 meters) water resistance, similar to the Mi Band 4 which is surprising at its price point. Coming in with an AMOLED screen, retaining the software that’s on the Mi Band 4 along with loads of activity monitoring, this is the band that Indians will crave for.

You will find over 70 watch faces, which is great in fact, along with four colours (black, blue, olive, and red) for the strap. Redmi Band is not only the first Redmi-branded wearable but also the most affordable wearable from Xiaomi till date.

The Redmi Band has been priced at 99.99 yuan (US$ 14 / Rs.1,099), but will first go up for crowdfunding from April 9th at an introductory price of 95 yuan (Rs.999 approx) in China. No words regarding availability in India but we can expect them to bring this incredible wearable to compete against the Realme Band.