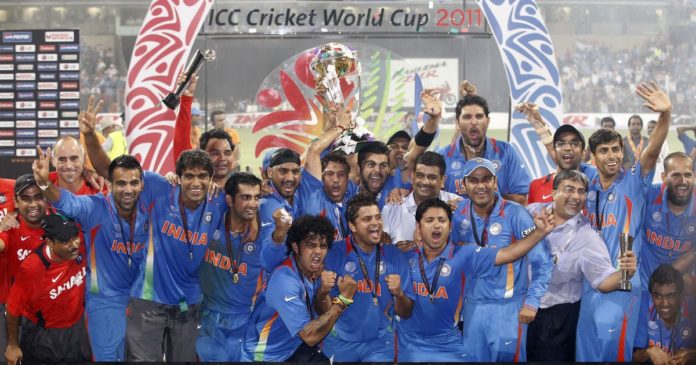 It’s a famous saying “Time and Tide wait for none”. Rightly so, it just feels like yesterday night when Mahendra Singh Dhoni hit the ball over the boundary for that famous six off Sri Lanka pacer Nuwan Kulasekara.

Ravi Shastri erupts in joy sitting in the commentary box. His famous commentary lines: “Dhoni finishes off in style. A magnificent strike into the crowd! India lift the World Cup after 28 years.”

The whole of Wankhede stadium was bursting with joy. The Indian fans had come out on road to celebrate India’s second Cricket World Cup win. Cricket is indeed a religion in India. It was like a festival for all the Indians. Finally their long wait of 28 years were over.

Arguably, India’s greatest cricketer Sachin Tendulkar finally had the trophy in his hand in the last World Cup match of his glorious career. The Master Blaster had almost all the batting records in his name. The only trophy which was missing was the Cricket World Cup.

Sachin Tendulkar had carried India on his shoulders for 22 years. It was time for the younger generations – Virat Kohli, Yuvraj Singh, Mahendra Singh Dhoni, Gautam Gambhir, Zaheer Khan to carry him on their shoulders and gift him the World Cup.

Yuvraj Singh was rightly adjudged the Man of the Tournament after he scored an amazing 362 runs in 9 games at an average of 90.50 with 1 hundred and four half-centuries. He also provided India with important wickets at crucial times. He took 15 wickets at an average of 25.13.

The biggest thing about Yuvraj’s World Cup win was that he would wake up in the middle of the night and would find it difficult to breathe and used to cough immensely. Right after the World Cup win, he was diagnosed with lung cancer. After fighting almost a year with cancer, Yuvraj again emerged victorious in his life.

The Man of the Match award in the final was given to Mahendra Singh Dhoni. But it would be unfair if we forget about Gautam Gambhir’s batting. Gautam Gambhir deserves a special mention.

Sri Lanka gave India a big target of 275 runs, though it was very much possible to chase for the Indian team given their batting strength. But the biggest hurdle came when both Virender Sehwag and Sachin Tendulkar got out cheaply. Then the duo of Gautam Gambhir and Virat Kohli forged an important partnership to steady the Indian team. Gautam Gambhir scored a brilliant 97 and from there Dhoni took the Indian team over the line to lift the 2011 World Cup in the Wankhede Stadium, Mumbai.

All the players and staff who were associated with the 2011 World Cup team will always be remembered as heroes and they will have their names engraved in the history of Indian cricket. They held our tricolour high among all the countries and it was a proud moment for all the Indians sitting around the globe.

It’s been 9 years since that proud day! 2nd April will always remain an important day for India.

You can check the full scorecard of the 2011 World Cup final.