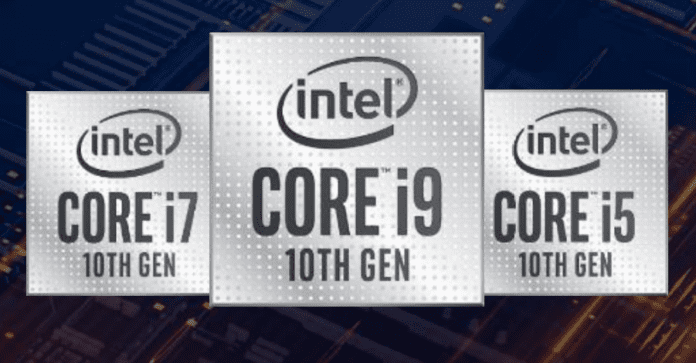 After a lot of leaks and benchmarks, Intel has officially announced its new 10th Gen Intel Comet Lake-H gaming processors for laptops. Intel’s new offering based on 14nm will directly go head-to-head against the very capable Ryzen 4000H gaming CPUs.

With more and more AMD launched, Intel took no chance by launching its new laptop gaming CPUs keeping frequency as its strength. According to the original article from Notebookcheck, the new 10th Gen H-series CPUs exceeds the 5.0GHz barrier and hits a boost clock speed of 5.3GHz on the Core i9 model.

The Core i7-10875H too features the same 8 cores and 16 threads as the Core i9 model with a relatively lower 2.3GHz base and 5.2GHz boost clock speeds.

All of the Core i7 models have a boost up to 5 GHz and in the i7 & i9 models Intel is using an improved Thermal Velocity Boost (TVB) method to opportunistically boost clocks to 5 GHz or above.

Intel is marketing or giving more importance to the clock speeds as high-frequency cores are helpful in games and heavily single-threaded applications, which is the purported advantage Comet Lake-H has over Ryzen 4000H.

TVB is an opportunistic overclock that increases clock speeds by 200 MHz if the operating temperature is 65°C or less and if enough turbo power budget is available. It works in conjunction with Turbo Boost Max, now in its 3rd iteration, which identifies the processor’s fastest cores and directs workloads accordingly.

Comet Lake-H will be based on the Intel 400-series chipset and will offer a maximum of 40 PCIe lanes out of which 16 will be from the CPU itself.

Intel expects more than 30 thin and light gaming notebooks and more than 100 designs using the Comet Lake-H parts. The first laptops featuring the Intel Comet Lake-H are already being made available but it will interesting to see how they stand against AMD’s cheaper 7 faster Renoir Ryzen 4000H APUs.