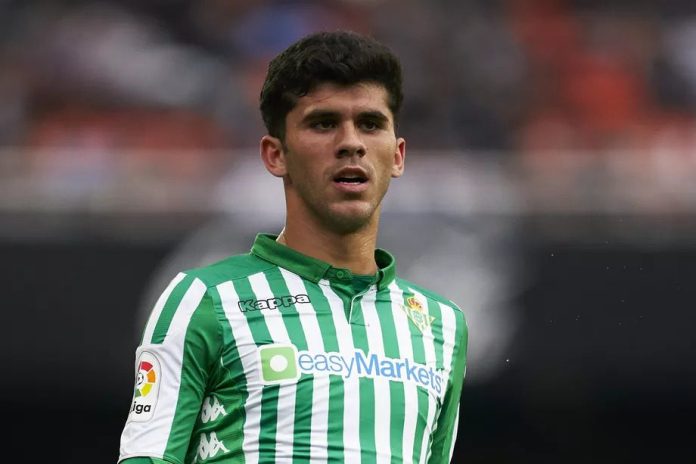 Carles Alena is all known to be a very talented young Barca player who was not given proper chance in the first team under Valverde and was so loaned out to Real Betis in the January transfer window. Now, the situation has changed and the 61-year old Spaniard coach is heading the Blaugranas.

When the season’s end is uncertain, Barca is already wasting no time to shape its future especially when ‘magical’ Messi is in the limelight of his career and this season we haven’t seen a positive Barcelona in the midfield, so naturally, Barca board will be tensed to strengthen its squad in the next season.

The Blaugranas already have some brilliant midfielders like De Jong, Arthur, Vidal, Rakitic, Busquets but it seems Arthur is not at his best and Rakitic along with Vidal will be shown the door next season so Barca’s asset Carles Alena who is currently at loan will be vital next season.

Sport has reported that Quique Setien wants the midfielder at the club next season and he does think Alena is a useful resource to be played between the lines. Barcelona has already told Alena that they need him in the squad for the 2020-21 season.

Also, there are reports which also says he does have other offers from big clubs as well. The 22-year old was frustrated due to his lack of game time under Valverde and we saw him activate a clause in his contract and to go out on loan in January.

Alena has made 10 appearances for Real Betis in all competitions since the two months of his stay at the club among which his game against Barcelona was phenomenal and his passes were great. It will be interesting how he plays under Setien in the upcoming season and help his squad in the midfield.

The Barcelona board has come under heavy criticism in recent times. The relationship between club legend Lionel Messi and the board has...
Read more

Sergino Dest has been a hot name in the transfer market this window, as far as defenders are concerned. The Ajax right-back...
Read more
Load more

Day 8 of the Indian Premier League (IPL) will feature a clash of two heavyweights as Sunrisers Hyderabad will take on Kolkata...
Read more