Arsenal crash out of the Europa League 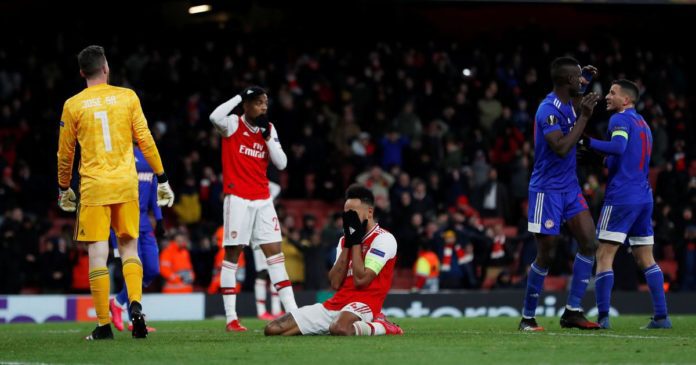 Arsenal were stunned by Olympiacos in the 2nd leg of the Europa League. Arteta’s men were improving day by day but this Europa League knock out will prove to be fatal for their confidence.

Youssef El-Arabi’s late strike in extra-time secured a stunning 2-1 victory for Olympiacos. The match was tied 2-2 on aggregate but Olympiacos progressed to the round of 16 courtesy of the away goals rule.

Arsenal had a 1-0 lead from the 1st leg. But Papa Cisse’s second-half strike took the game into extra time.

Pierre-Emerick Aubameyang gave Arsenal the lead on aggregate in the 113th minute of the game with a stunning overhead kick. But they conceded another goal with just a minute of added time to play. El Arabi capitalized on some defensive error to send the Greeks through to the last 16, with Aubameyang missing a last-minute sitter from less than six yards.

Aubameyang told BT Sport about the miss: “I don’t even know. I feel very, very bad. This can happen. I don’t know how I missed this chance. I was tired and I had some cramps as well, but it is not an excuse. I have to score this goal, but it can happen.”

He further added: “What can I say? It’s very, very hard, very tough. It was a tough game again. I think we missed putting some pace in the game – that cost us a little bit. Then the last-minute goal was unlucky for us. That’s it.”

“We try to keep improving in the league and we’ll try to win as many games as possible, and we’ll see how many chances we have to qualify [for the Champions League].”

Arsenal manager Mikel Arteta told BT Sport: “It hurts a lot. We had a lot of intentions in this competition. It was very important for us. Emotionally it has been a very difficult game. We tried and tried and tried, we threw everything at them. They defended very deep. We managed to score though and we were through but then we conceded a late corner and it was another set-piece.”

“To attack against 10 players is a very difficult thing. I felt we created enough chances to win the game comfortably. It didn’t happen but we had to manage the game much better in the final five minutes.”

“I don’t think so [his side were too complacent going into the game]. The players knew it would be a difficult game. It is cruel. It is a massive disappointment but at the same time, I am very proud of the players.
It would have been an incredible lift if we had managed to go through the tie. The players have my backing for the way they played but it is painful.”