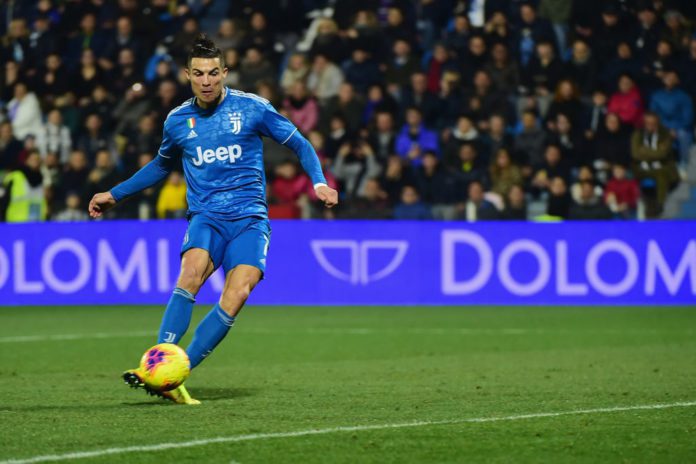 Cristiano Ronaldo is still going strong at the age of 35. He made his 1000th career appearance against SPAL on Saturday. Juventus won the match 2-1 to go four points clear at the top of the Serie A table.

It was his 73rd appearance for Juventus. The majority of his appearances have come for Real Madrid. He played 438 times for Los Blancos.

The second-highest appearances came for Manchester United with 292 matches. He started his career with Sporting CP making 31 appearances and a further two for Sporting B.

Ronaldo has played 164 times for Portugal scoring over 100 goals. He is the second-highest goalscorer in men’s’ international football.

Cristiano Ronaldo scored in the 39th minute against SPAL. He tucked in a goal from Juan Cuadrado’s cross. It was his 725th career goal. He has now found the net in 11th consecutive Serie A matches.

The 725th goal made him level with Fiorentina icon Batistuta and Sampdoria star Quagliarella. They both have previously scored at least once in 11 straight Serie A matches.

Batistuta achieved the feat in the 1994-95 campaign. Quagliarella did it last season at the age of 35. But no one has scored in 12 consecutive Serie A matches.

Juventus will play with Inter on Sunday. If Ronaldo can find the back of the net in the title-deciding clash, he will make Serie A history.

If there’s any one player on the planet on whom you can bet to consistently score in 12 straight Serie A games, it is Cristiano Ronaldo. All the money will be on him to make a new Serie A record. He is an absolute phenomenon.

Previous article
iPhone SE 2 launch still planned in the first half of 2020 despite Coronavirus Outbreak
Next article
Realme to launch Smart TV in India soon.