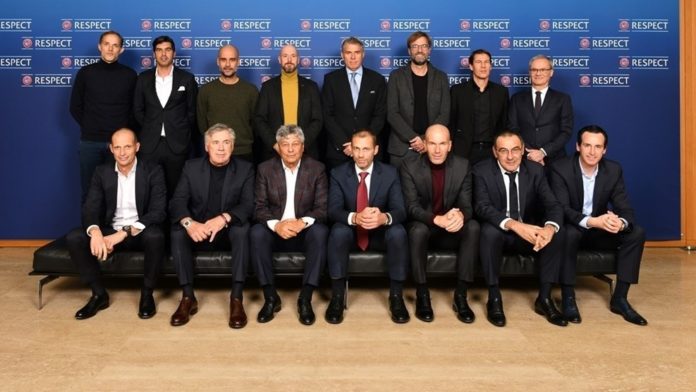 In today’s world, hundreds of millions are spent in the transfer market. The weekly wages of the players have gone up significantly. The managers aren’t far behind too.

The managers of the top European clubs earn a handsome amount of money. So much depends on the manager, from tactics to team selection everything. They rightly deserve their paycheques.

So let’s see who are the top 5 highest paid football managers right now:

The man who revolutionised Real Madrid in the last five years is bound to be on this list. Zidane has won 3 successive Champions League which is the joint-highest any manager has won in his managerial career. He has also guided Real Madrid to the summit of LaLiga.

Zidane left Real Madrid in May 2018 and has again returned in 2019 to steady the Romaldo less Real Madrid side. He has again done a wonderful job this season. Real Madrid are on course to win both the LaLiga and the Champions League.

Maybe, Zizou deserves to be at the top of this list, considering the fantastic job he has done and is still doing at Real Madrid.

Considering recent form, how is Mourinho receiving a greater paycheque than Zidane is still a mystery. The ‘Special One’ has failed to deliver in his previous managerial stint at Manchester United.

Tottenham board has still found Mourinho worthy of leading the last season’s Champions League finalist. They have won 8 out of 14 league matches under Mourinho. A trophy at the end of the season will only justify his huge salary.

The manager who has successfully transformed his side into one of Europe’s best. Klopp had done a terrific job with Borussia Dortmund and has again repeated the same feat with Liverpool.

Guardiola has won consecutive Premier League titles with Manchester City, a feat unachieved in England for a decade. He has won five major trophies over four seasons in England.

It is a bit of a surprise to find that Simeone is at the top of this list. The manager who has not won the Champions League or hasn’t made any significant LaLiga records earns almost double the salary of the one who has created various Premier League records with Manchester City.

The gap between the second and the first is quite a bit. He has done an exceptional job at Atletico Madrid but whether he deserves this large sum of money is still a doubt.

Simeone has won the La Liga, Copa del Rey and two Europa League trophies during his stint. He has also been a two-time Champion League finalist, both times losing to their local rivals Real Madrid.

Previous articleMessi wants both Neymar and Lautaro Martinez at Barcelona
Next articleTake practice tests and pass your Microsoft MS-900 certification exam with no flaws!