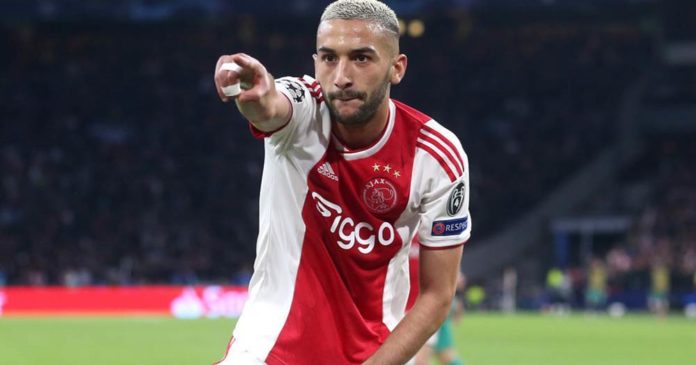 Ajax have confirmed that their playmaker Hakim Ziyech will join Chelsea at the end of this season in a deal that could be worth up to €44million (£36.7m).

The 26-year-old has agreed on personal terms with Frank Lampard’s side but will remain with Ajax for the end of this season.

Hey @ChelseaFC, you have to believe in his magic.

And great things will happen. 🔮

The Moroccan player was among the standout performers of the Ajax team which went to the semi-finals of the UEFA Champions League last season after beating the likes of Real Madrid and Juventus.

Ziyech joined Ajax from Twente in 2016. Since then he has scored 38 league goals and 48 across all competitions for Ajax. He has been directly involved in 166 goals since his Eredivisie debut in 2012-13, contributing 79 goals and 87 assists.

Ziyech ended last season with 21 goals and 17 assists and won the Ajax Player of the Year award. He has started this season in a similar devastating fashion. He has scored six goals and provided 13 assists for the Eredivisie league leaders this season.

Ajax manager Erik Ten Hag told Fox Sports: “Ziyech to Chelsea? A transfer was coming, we expected it to happen. I actually already expected this one or two years earlier. And each time it was: ‘Wow, he stayed again’.
We are just happy that we will still have him until the end of the season.”

He further added: “I am not surprised by the news about Ziyech. I know that our players are very popular with the big clubs in Europe. That is just great. I have known for a long time what Hakim wants. He has a picture in mind. He knows exactly which clubs he finds interesting and which ones are not. “

“Chelsea are a fantastic club. When it is final, I am very happy for Hakim, and I am very proud of him.”