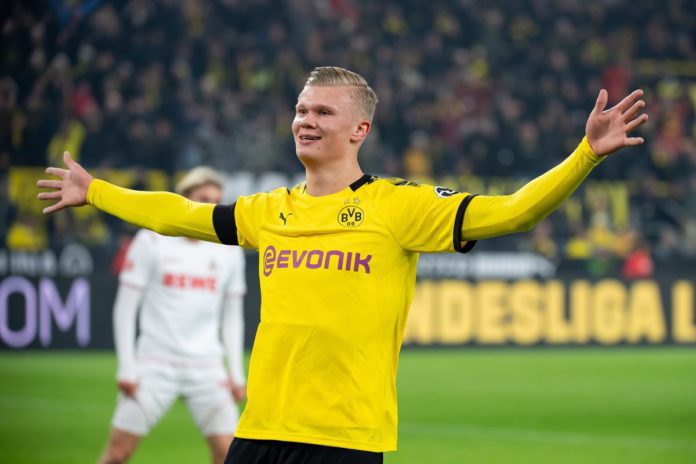 The 19-year-old striker has taken the Bundesliga by storm. He has done some super-human stuff. His goal-scoring record for Dortmund has been phenomenal.

The first player in Bundesliga history to score 7 goals in their first 3 games 🔥🇳🇴 pic.twitter.com/k9UtqEPHZv

Haaland scored another brace in Dortmund’s 5-0 rout of Union Berlin. He has now scored 7 goals in 3 matches.

Erling Braut Haaland is the first player in Bundesliga history to score seven goals in his first three appearances in the competition. Incredibly, all of his first seven shots in Bundesliga has ended as goals.

“As far as I can tell, he is basically a mix of Lewandowski and Aubameyang because he also has got a complete game, he has got speed, finesse, and he needs about half a chance to score one goal.”

“I’m happy for [Dortmund] but I’m not happy as an opponent, obviously, because he makes something out of nothing. So congrats to the club for sealing the deal.”

Haaland said after the match: “I think it’s a mix of hard work and good teammates around me. My teammates are so good. Then it’s getting easy for me. I am enjoying my time so far and there’s a lot more to come.
I didn’t think about [scoring] so many goals, but now it’s seven and I am enjoying it.”

Dortmund sporting director Michael Zorc said: “You can’t imagine a better start. His job is to score goals. You can see that with every fiber of his body. He’s only 19 years old. We don’t make any comparisons. It makes no sense. Let him just play football and then he will score.”

He further added: “We have quite a few 19-year olds who are incredible. I just saw the stats. Jadon is the first player under 20-years-old to reach 25 goals in Bundesliga. That’s unbelievable. But maybe Erling will get there too.”

After the hat-trick in his debut match, it seemed as if it was a one-match wonder, but now it is turning out to be a normal thing for the teenager. Haaland definitely has something special in him. Maybe we’re looking at a future Ballon d’Or winner, but he is still a teenager and has to be handled carefully by Lucien Favre and Dortmund.

How the Bundesliga is consistently supplying football with generational talent?