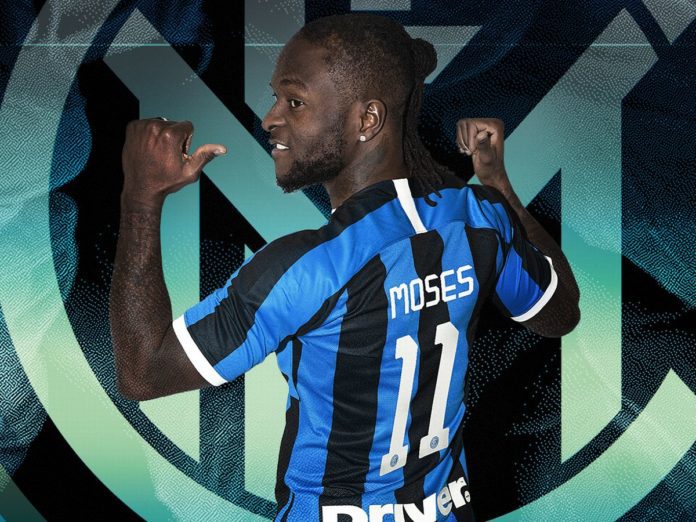 Inter are having a busy January transfer window. They have earlier signed Manchester United veteran Ashley Young. Young became the 3rd United player to join Inter since last season. He has now been reunited with his former Manchester United teammates Alexis Sanchez and Romelu Lukaku.

The versatile wing-back has made his move from Manchester United to Inter for a reported €1.5m fee. He has signed a six-month deal with the option for a further year.

Now, Antonio Conte has signed one of his former players. Inter sign Victor Moses from Chelsea on a loan deal with an option to buy. Moses has spent the 1st half of the season with Fenerbahce in the Turkish Super Lig on loan.

Moses was a key player under Antonio Conte when Chelsea last won the Premier League title in 2016-17. He joins Inter for a reported fee of €10million. He is now again reunited with his old boss at San Siro as Conte looks to win their first Scudetto since 2010. Inter currently lie second in Serie A behind champions Juventus.

According to a report from Sky Italia, Serie A side Inter now expect to complete the signing of Danish international attacking midfielder Christian Eriksen from Tottenham Hotspur in the January transfer window.

The Christian Eriksen transfer saga could end as soon as Monday. As things seem to stand right now, the midfielder’s move to Inter is all but complete and a medical has been scheduled.

CalcioMercato claims Tottenham owner Daniel Levy has accepted an offer from Inter worth €15million (£12.6m), plus €5m (£4.2m) in add-ons. Eriksen’s provisional four and a half year contract with Inter will see him earn £260,000 a week. He is expected to travel to Milan for a medical in the next few days.

Antonio Conte is building a team that has all the qualities needed to dethrone Juventus from the top of Serie A. Cristiano Ronaldo’s Juventus will face tough competition from Inter in their bid to retain the Serie A title this season.

Previous article
Copa del Rey: The draw has been made for the round of 16
Next article
Vivo iQOO phones to launch in India next month, 5G will be included in one