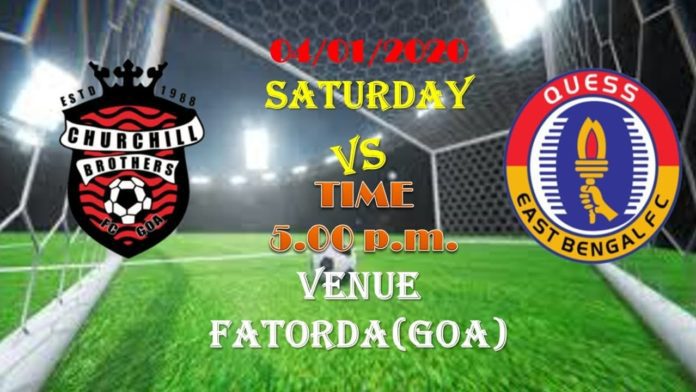 Churchill Brothers’ Willis Plaza headed home a 90th-minute winner against East Bengal to be top of the table.

Churchill Brothers now have three wins from four games and are on top of the table with 9 points, while the Kolkata-based side East Bengal dropped to third with eight points from five games.

East Bengal were playing after a long three-week break but Churchill’s previous outing was a heartbreaking last-minute loss to the Indian Arrows.

Plaza tried to break the deadlock in the 62nd minute but missed from close, two minutes later, he hit the cross-bar.

It was Bengal’s turn to hit back with Crespi’s crisp right-footer thudding the Churchill bar in the 85th minute and Espada, a minute later, missed the target from a lay-off from Colado.

East Bengal earned five corners but Churchill could manage only one in the first half-hour. The referee also had a busy half having to flash his card as many as three times. It ended with a Plaza flash strike but the scoreline remained goalless at the end of first half.

The game looked like meandering towards a draw but Plaza struck his fourth of the season after coming close on at least three occasions earlier in the game.

Finally, a measured cross from sub Israil Gurung, who came in late in the second half. Plaza managed to get it and banged it home past a diving Lalthuammawia Ralte in the 90th minute.

Churchill broked the unbeaten record of the red and golden brigade in this I-League.

Do check out: Mirabai Chanu of India ranked eighth in Olympic Qualification Rankings