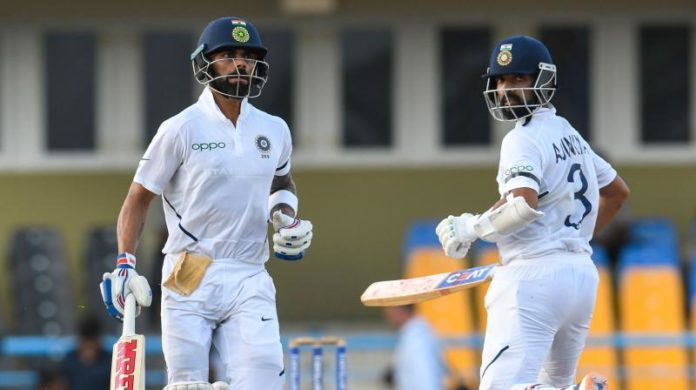 Virat Kohli ends the year at the top of the list in ICC’s newly released Test rankings for batsmen on Monday 30th December.

On the other hand his companion Cheteshwar Pujara slipped a place, who was 4th in the ranking of ICC Test Batsman is now placed fifth after a poor performance in second half of the year.

Steve Smith the Australian former skipper is placed second in the list with 911 points.

Indian skipper Virat Kohli built a healthy lead of 17 points ahead of second-placed Steve Smith with 928 points. Kohli increased thedifference in ranking after scoring a century in his first pink ball test.

New Zealand skipper Kane Williamson remained on third spot with 822 points, with a huge gap of difference between him and Smith of 89 points.

Marnus Labuschagne of Australia is the top scorer among batsman this year andacquired the 4th spot. He scored 1085 runs in 11 Tests and moved a spot to fourth.

Indian wall Chiteswar Pujara is on the 5th position of the list with 791 points. Pujara was placed fifth with 791 points, and just below the sixth-placed Babar Azam of Pakistan.

David Warner also moved a spot to seventh after his triple century. He is on the seventh position of the list with 759 points.

Ajinkya Rahane is the joint seventh with 759 points.

With his enterprising 95 against England in the first Test, Quinton de Kock not only set up his team’s win, but also shot into the top-10 of the latest rankings by eight places. He is on the tenth position with 712 points.

Joe Root of England is on the ninth position of the list of batsman, with 754 points.

Do check out: Virat Kohli equals Dhoni as the most successful test captain of India