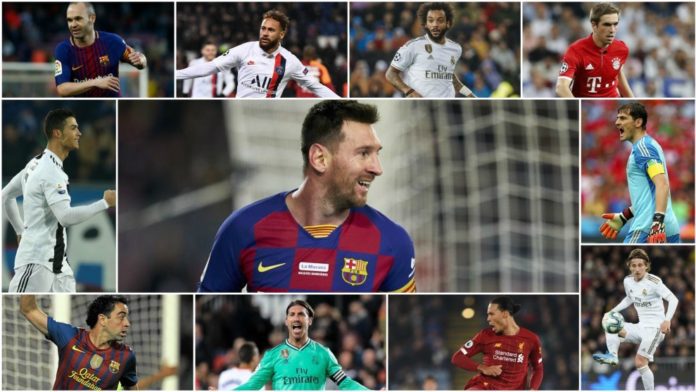 The decade of the 2010s is coming to an end. So here’s the football team of the decade!

The decade of the 2010s was quite incredible for the football fans. Cristiano Ronaldo and Lionel Messi – the two players from another planet – have dominated the world of football in this decade.

The prestigious magazine France Football, who gives the Ballon d’Or award every year, have now announced their Team of the Decade.

This team of 11 players is dominated by Spaniards who had a very successful decade. They won the World Cup and the Euro and on the club level two Spanish clubs – Real Madrid and Barcelona – have conquered it all.

France Football have taken into consideration a simple, precise and above all very revealing criteria: the presence of players in the top 10 of the France Football Ballon d’Or rankings in the last ten years.

Team of the Decade

Iker Casillas
Casillas was at the top from the beginning of this decade. He won the World Cup in 2010, Euro in 2012, and was also the winner of the Champions League in 2014.
He had three appearances in the top 10 of the Ballon d’Or, in 2010, 2011 and 2012. The Spanish goalkeeper fully deserves his place in the team of the decade.
Manuel Neuer and Gianluigi Buffon were also contenders for this place, but Casillas won it all in this decade. He is the only goalkeeper, over the decade, to have won the Champions League, the World Cup and the Euro.

Philipp Lahm, Virgil van Dijk, Sergio Ramos, Marcelo
Philipp Lahm starts on the right flank. He was 6th in the 2014 Ballon d’Or. The German right-back won the World Cup as captain in 2014. He has also reinvented himself at Bayern Munich as a midfielder in the latter stage of his career.
Virgil van Dijk and Sergio Ramos will form the centre-back pair. Liverpool signed Van Dijk from Southampton. The Dutch giant changed the face of the Reds under Jurgen Klopp and his national team too. He came second in the 2019 Ballon d’Or. Sergio Ramos has led Real Madrid to greater heights. He won 4 Champions League – 3 in a row. Ramos has also won the Euro and the 2010 World Cup. He finished 6th in the Ballon d’Or 2017.
Marcelo will occupy the left-back position. He has also conquered it all along with Casillas and Ramos at Real Madrid. He is the only player on this list, who has never appeared in the top 10 of the Ballon d’Or. He earned this place due to his 16th place in 2017 and his 22nd position in 2018.

Xavi Hernandez, Andres Iniesta, Luka Modric
Barcelona and Real have dominated the decade, in terms of individual or collective trophies, and it is logical that the midfield consists of Real Madrid and Barcelona’s midfield maestros.
Xavi Hernandez was phenomenal in Pep Guardiola’s Barcelona and in the Spanish national team, winning the 2010 World Cup. He finished three times in the top 5 of the Ballon d’Or. He forms the basis of the midfield. He will be ably supported by Andres Iniesta. He scored the heroic goal in the final of the 2010 World Cup. He was also sensational with Barcelona, winning many titles. His Ballon d’Or rankings – 2nd in 2010, 4th in 2011, 3rd in 2012, 6th in 2013 and 9th in 2015. Luka Modric will complete the midfield trio. He is the one who ended the Messi-Ronaldo duopoly over the Ballon d’Or by winning the 2018 Ballon d’Or. Before that, he finished 6th in the ranking in 2018. His record with Real Madrid, notably in Europe is phenomenal.

Cristiano Ronaldo, Lionel Messi, Neymar Jr
Portugal, Argentina, Brazil – A trio that stinks of football, right? In any case, these three superstars have undoubtedly marked their era, even the history of football.
To start, Lionel Messi and Cristiano Ronaldo have defined this decade. They are way above the other players. Messi has 6 and Ronaldo has 5 Ballons d’Or. This duo has been winning for years and still fuel the rivalry. They have never left the top 10 of the Ballon d’Or ranking over the entire decade, and deserve more than anyone their place on this team.
To support them, Neymar Jr is one player who has the ability and fully deserves this place. He has been in the top 10 Ballon d’Or list 6 times. Whether with Santos, Barcelona, PSG or Brazil, with whom he won the Olympic Games, the Brazilian has made his class speak. He always aspires to be the world’s best.

Raphael Varane’s Premier League move all set to be completed

Top 5 candidates for the Ballon d’Or