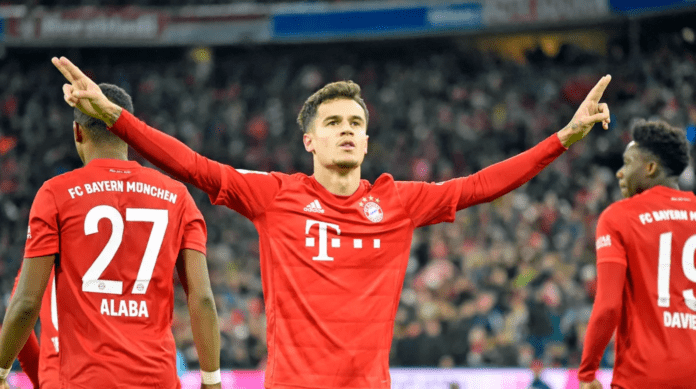 Bayern Munich headed into this match on the back of consecutive Bundesliga losses to Bayern Leverkusen and Borussia Monchengladbach. Werder Bremen deservedly led at the Allianz Arena through a fabulous Milot Rashica strike but their joy was ended by Coutinho’s brilliance.

Countinho’s masterclass turned the tables for Bayern Munich. He put on an amazing display against Werder Bremen. He was also on the scoresheet in the midweek 3-1 win over Tottenham in the Champions League.

Coutinho has endured a mixed start to life in Bavaria. But the Barcelona loanee was absolutely sensational at the weekend, scoring a sumptuous hat-trick including a brilliant curled effort to complete his treble.

Bayern Munich interim head coach Hansi Flick enjoyed this performance as his players bounced back emphatically from back-to-back defeats in the league.

He told a news conference about Coutinho’s amazing performance: “I think everyone in the stadium enjoyed his performance. It made me especially happy that the whole team celebrated together with him and shared his happiness from the heart.
He scored three goals and assisted twice. This is amazing. We are very happy with his performance.”

The Poland striker told Bayern’s official website about Coutinho: “That was his game today, with the ball, with the movement. How he did it was outstanding.
We need such a player. I am very pleased that he showed how good he is and what great potential he has.”

Coutinho, a former Liverpool star was one of the best emerging players. During the middle of the 2017-18 season, Barcelona signed him for a whopping €160 m. But the playmaker found it very difficult to make it to the Barcelona starting XI.

His form dropped and he was far away from the Coutinho we saw at Liverpool. While his former club Liverpool was playing in consecutive Champions League finals and winning the latter one, Coutinho was struggling at the Camp Nou.

Coutinho finally decided to go on loan to Bayern Munich at the start of this season. He grabbed all his chances at Bayern and it seems he has finally found his feet at the Allianz Arena. The old Coutinho is back with a bang.

Previous articleHuawei’s Kirin 1020 codenamed Baltimore to give 50% better performance than Kirin 990
Next articleWayne Rooney: I still have the quality to play in the Premier League

Bayern Munich trying to sign Frenkie de Jong on loan with a buy option from Barcelona?