Roberto Martinez: “Eden Hazard is the Michael Jordan of football” 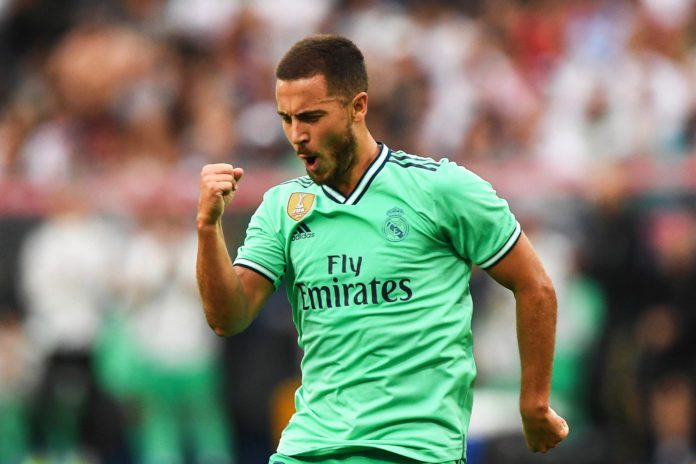 Belgium boss Roberto Martinez is very fond of his national team captain Eden Hazard. He thinks Eden Hazard will surely win the Ballon d’Or in the future. And rightly so, after Lionel Messi and Cristiano Ronaldo, Eden Hazard is at the top along with the likes of Neymar Jr and Kylian Mbappe.

Eden Hazard has won almost every trophy available to him in England with Chelsea, except the Champions League. He is regarded as one of the best footballers right now. To continue his conquest for the Champions League and also to win the Ballon d’Or he has moved to Real Madrid in this summer transfer window.

Coming from the Premier League, he had a slow start to life at Real Madrid. He came to Madrid overweight. He had to work hard to get back to his peak. And now he is reproducing the form that we had seen before in England.

Martinez told Cadena Ser program El Larguero: “I see Hazard winning the Ballon d’Or. He has the role of being a Ballon d’Or winner. What he has done is the level of the Ballon d’Or and he is always eligible for the prize.”

“He has done it at Chelsea, in France. It is difficult for a foreigner to be at the reference of a project that works to win the league. He is a last-pass player, a Michael Jordan. Hazard is the Michael Jordan of football.”

But unfortunately, Hazard got injured in the Champions League match against PSG. According to some reports, Hazard will miss the El Clasico against Barcelona on 18th December due to the injury.

Martinez further added: “It’s more the process of the injury. In the game against PSG, he had a setback and now we’ve discovered that he will spend a bit more time out than expected. There’s nothing to worry about. You want a player like Eden to be 100 percent, and now he’d established himself in the team and he was playing well.”

“He’s in very good physical condition and he’ll be back very soon. You don’t want to lose players of his level, but a team always has to deal with injuries, suspensions… Real Madrid are well prepared for this.”

Real Madrid head coach Zinedine Zidane told about Hazard’s injury: “It’s always bad news when a player gets injured. Of course he’s upset that he’s unavailable. It might be a bit more concerning, the injury, than we first thought.
We will have to see, but he will be back with the rest of the players soon.”

Zidane further added: “It’s a very bad piece of news that we’ve lost Eden Hazard to injury as we have some very big games coming up. He had been playing very well and I’m sure he will again in the future. It’s not good when you have players out injured, especially a player like Eden Hazard.”

“He was in great form. We’ve seen him play very well, he had reproduced that form that we had seen before in England. It’s a setback and hopefully, he won’t be out for long.”