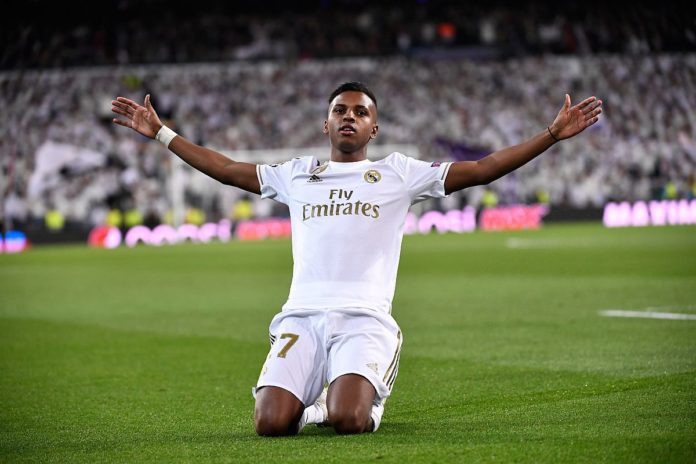 Rodrygo scored a perfect hat-trick to become the second-youngest player in Champions League to achieve this feat.

Real Madrid netted in 6 goals against Galatasaray in the Bernabeu. They also kept a clean sheet to make it an all-round performance. Rodrygo Goes scored 3 goals himself and provided an assist for Benzema.

Rodrygo Goes scored a perfect hat-trick converting with his left foot, right foot and head. At 18 years and 301 days old, the Brazilian became the second-youngest player to score a Champions League hat-trick. He is only behind Real Madrid legend Raul, who was 188 days younger than Rodrygo when he scored three times against Ferencvaros in 1995.

The Brazilian has now netted five goals in six games for the club since his reported €45million move from Santos. His performances have led to plenty of praise.

Rodrygo said to Movistar: “It is true that everything is going much quicker than what I expected when I arrived at Real Madrid. It is a very happy night. It is a dream come true to hear the Bernabeu sing my name. But I have to stay calm, be relaxed and continue to work day by day.”

He added: “Playing with Karim makes everything easier. He’s an amazing player and I’m very happy to play alongside him. I’m sure that what they’ve put on the ball is very nice because my team-mates are good people and they give me lots of confidence.”

Karim Benzema told the club’s website after the match: “We scored goals, played well and did not concede. It was a real party with the fans. I am no legend. When I signed for the club I never thought I’d get to this point and I am so happy.
I try to help the team and be at my best, I want to continue to help. I feel very confident, if I can help my team-mates by talking to them out there, then I will, that is down to my experience in this club.”

“Rodrygo looked very good to me, he’s not afraid. He plays the ball and I love it when I see a young man playing like that. As for Hazard, he’s a great player and our connection is very good. Little by little you’ll see what a great player he is.”

Zidane commented about Rodrygo’s performance at the news conference: “He is only 18 years old. We are so pleased with him. When he gets a chance to play he always does well, he did that in every sense. He works hard and does a lot of things. We need to have patience and not pressure him.
I am not surprised whatsoever, he is very talented. Perhaps we can be surprised by the three goals. He is happy, his game is a real joy to watch.”

He further said: “Logically we can be happy with the six goals, but we also kept a clean sheet, defending and respecting our rivals until the end because sometimes when you are four goals up at half-time you can relax, but we didn’t. Whenever we lost the ball we pressed hard and that led to us having a well-rounded game.”

Real Madrid are now in second place in their Champions League group. They are 5 points ahead of third-placed Club Brugge and may have already qualified for the round of 16 with two games to play still.