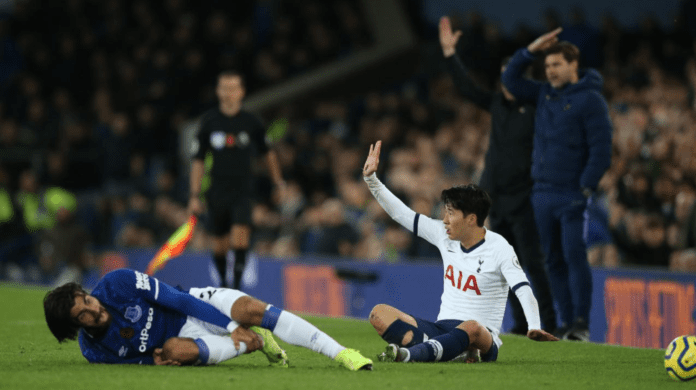 Son was left distraught by the serious injury which he has inflicted on Andre Gomes.

Andre Gomes suffered a horrific injury against Tottenham on Sunday after a collision with Heung-min Son and Serge Aurier. Everton have confirmed that he has fractured his ankle and will undergo surgery on Monday.

“The Portugal international was stretchered from the pitch during the second half of the game and taken straight to Aintree Hospital by ambulance accompanied by members of the Everton medical team. After undergoing hospital tests, it was confirmed he had suffered a fracture-dislocation to his right ankle.”

“The Club will provide further updates in due course.”

Andre Gomes will come back stronger

Everton manager Marco Silva told during his post-match news conference: “It was a really tough moment for us, forgetting the game and result. Andre will have all the support he needs from us.”

“It is a serious injury and I am 100 per cent sure Andre will become stronger as a footballer player and stronger as a man, he is a fantastic lad and professional and all the support he needs, he will have from us.
Our players are sad now, it is a tough moment in our dressing room, but the spirit we showed after that moment was good. It was the toughest moment for us this season.”

He further added: “He went to the hospital. Now, our medical staff is taking control of everything. They will give more information about the situation. We need to wait a little bit more to be more clear. It’s a bad moment for us as a group, as a team. We give all our support to Andre and his family as well. As a group, we have to keep the togetherness and the spirit we showed after that moment. I didn’t see the moment yet. I saw it live, I didn’t see anything more. I can’t talk to you about the tackle, the things that happened after the tackle.”

Son was devasted and inconsolable

Son was shown a yellow card by referee Martin Atkinson before the VAR stepped in and made it a red card. He was visibly distraught and inconsolable after his unintentional challenge which led to this serious injury for Andre Gomes. Players from both the teams were clearly distressed by the incident.

Tottenham Hotspurs manager Mauricio Pochettino said to Sky Sports after the match” “We feel very sorry. It was a very bad situation, very bad luck with how he landed. We can send our best wishes and of course I am very devastated by the situation. It’s not important, football; it’s important for him. We can talk about football but always feeling bad, feeling sorry for the action. It was so, so difficult.”

“The feeling changed in this moment. We were playing well, it was more close to the second goal for us. It’s difficult to assess the last 10, 12 minutes, but talking only about football, I am happy with the performance, the way we competed.”

“Sonny was devastated. During the situation, he was very confused, it was difficult to keep calm. After you watch the action on TV, [you can see] it was never his intention [to hurt Gomes]. It was very, very bad luck for Andre, for the family and for Everton. We finish with a red card for Sonny and, of course, the condition of the game changed. In this situation, we defend well but then we concede. I’m disappointed with the result.”

Son’s Tottenham teammate Dele Ali said to Sky Sports: “I didn’t want to look too much at what happened. All I can do is send him my best wishes and wish him a quick recovery.
Son is devastated, he’s in tears but it’s not his fault. He’s one of the nicest people you would want to meet and he’s not like that. He can’t even lift his head up he’s crying that much in the dressing room.”