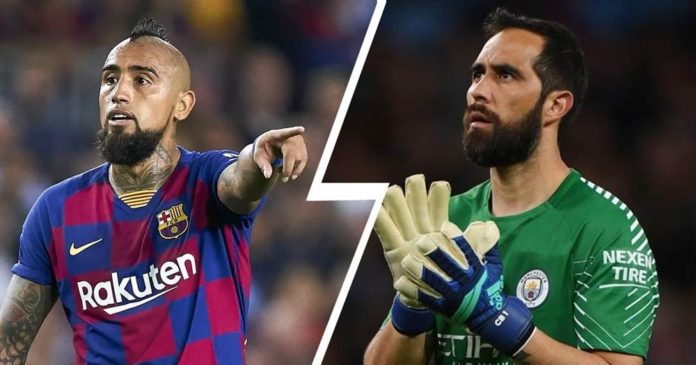 Arturo Vidal is known for its strength and leadership both at Chile and at his new club Barcelona. Vidal played a vital role in the midfield in Juventus and Bayern at his old days until last year when he joined the Catalans.

Former FC Barcelona goalkeeper Claudio Bravo has been the teammate to Arturo Vidal in the Chilean Internation football team. Chile has some glorious Copa America records in the past and both Vidal & Bravo have played an important part of the team.

Recently, Arturo Vidal has opened up about his complicated relationship with former Blaugrana Claudio Bravo. According to Vidal, when the duo was looked upon for the national team together in October, for the first time in two years, they didn’t even speak with each other.

“One of the two of us must take a step forward and it wasn’t me, for that reason I didn’t make any problems and we both trained individually,” Vidal revealed (h/t Diario Sport).

“He gave everything, as did I, the team could see that. We’re not friends, nor will we be, but the national team is the most important thing.

On the other hand, Arturo Vidal is missing opportunities at the Camp Nou, more specifically being used as a substitute more often. Though playing a key role in important matches, like against Inter where his presence marked a crucial victory for the team, Vidal is a victim of Barcelona’s overbooked midfield area.

Gazzetta Dello Sport even believes Vidal received various offers from unnamed Chinese and Serie A clubs but if he would, then he would prefer Inter to be a better choice and play under Antonio Conte.

But recently after an amazing home victory of 5-1 against Real Valladolid featuring Vidal who played an important role by scoring a goal and creating one, ESPN says that Barcelona is not interested in selling the player in the upcoming transfer window, as they feel Vidal plays a vital role in the club dressing room.

Previous article
Chelsea vs Manchester United – Carabao Cup: Pre-match analysis and When and Where to watch the match live?
Next article
NVIDIA GeForce GTX 1660 & 1650 Super GPUs are here for budget gamers