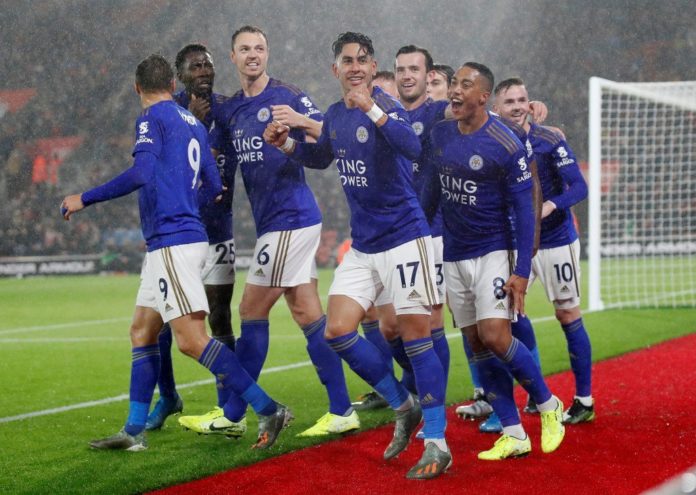 Jamie Vardy scored an injury-time penalty against Southampton to help Leicester City collect a piece of Premier League history by sealing a 9-0 win at St Mary’s. In that history-creating match, Vardy and Ayoze Perez both scored hat-tricks and James Maddison, Youri Tielemans and Ben Chilwell were also on target for Leicester City.

This 9-0 win has equalled the previous best in the competition’s history, Manchester United’s 9-0 win over Ipswich in 1995. The win also created another Premier League history by becoming the biggest top-flight win away from home in 131 years of league football in England.

Ryan Bertrand was sent off in the 10th minute when he made a reckless challenge in the build-up to Ben Chilwell’s 10th-minute opener. The red card had put Southampton at a disadvantage but no one could have imagined this humiliation.

Jamie Vardy told BBC Sport after the match: “I got made aware by Jonny Evans there could be a record. He told everyone at 6-0 there was a record and was adamant we were going to go for it. We were really hungry.
We started really well. They went down to 10 men, we know what it is like, we know we had to keep going and it paid dividends. It sums the lads up. We want to be playing well and we know we can cause anyone problems and win games. We are taking each game as it comes. We know we can cause anyone problems. It’s a long season and see where we are at the end.”

He further added: “The main thing Vichai ever wanted from us was to fight and win and we’ve done that in massive amounts. Hopefully, the boss is looking down on us.” This record win has come two days before the first anniversary of the death of their chairman Vichai Srivaddhanaprabha in a helicopter crash outside the King Power Stadium. It was the perfect gift to their chairman.

Leicester City coach Brendan Rodgers told the BBC: “I was very pleased with our work rate. We scored some great goals and were very hungry tonight. I’m very pleased with how we defended and how ruthless we were. I’m very proud to stand and be the manager of that team.
We wanted to get the ball back quickly and attack again. A mark of good sides is you don’t let up and we certainly did that in the second half. We were ruthlessly simple in our game. When you’re so many goals up, you can easily slow and lose focus. To be a top team you must be clinical.”

Southampton captain Pierre-Emile Hojberg said: “I can only put my head in front of the team and say the only thing that matters is what we do going forward, and we can never let something like this happen again.
It’s very embarrassing and very difficult for the whole team and we’re the ones to blame. We need to take it. I’m sorry, the only thing I can say to the fans is ‘I apologise’.”

Southampton coach Ralph Hasenhuttl told the BBC: “That was one of the tough ones tonight. The performance was a disaster and I have to apologise and take 100% responsibility. I’ve never seen a team act like this, there was no fight for anything.
It was horrible to watch and everyone who stayed to watch is really a fan of this football club. I’m a proud man, but the way we play today is not the way I want to see my team play. I said we must play to the last minute, but I can understand why the fans left. We all must do everything to pull this back.”

Let’s take a look at some Opta numbers from this historic match:

9 – Leicester’s nine unanswered goals made this the joint-biggest Premier League win of all time, level with Manchester United’s 9-0 thrashing of Ipswich Town in March 1995.

0 – Goalkeeper Kasper Schmeichel kept a clean sheet for the Foxes – just like his father Peter did for United when they demolished Ipswich 24-and-a-half years ago.

131 – The margin of victory is the largest by a top-flight side away from home in the 131-year history of league football in England. It was also Southampton’s biggest defeat of all time.

2 – Leicester became the second side to have two players score a hat-trick in the same Premier League game after Arsenal duo Jermaine Pennant and Robert Pires in May 2003 – also against Southampton.

5 – Rodgers’ men were 5-0 up at half-time, making them the second away team in the Premier League to accomplish this feat after Manchester City did so at Burnley in April 2010. The latter game at Turf Moor finished 6-1.

3 – Perez made it back-to-back trebles against Southampton. He claimed all Newcastle United’s goals and the match ball in a 3-1 win over Saints in April this year. The last player to score successive Premier League hat-tricks against the same opponent was Luis Suarez for Liverpool against Norwich City in April and September of 2012.

50 – Perez’s second goal was his 50th in all competitions in English football.

19 – Leicester led 3-0 after 19 minutes. They had not scored three unanswered goals so quickly in a top-flight game since racing ahead inside eight minutes versus Derby County on April 1998.

3 – Bertrand’s dismissal meant Southampton had their numbers reduced in a third straight meeting with Leicester. Newcastle were shown four red cards in a row versus Liverpool, a streak of shame that concluded on May 2014.

This 9-0 win against Southampton has taken Leicester City up to the second place in the Premier League table. They are now only five points behind the league leaders Liverpool. Leicester City will now play against Tottenham Hotspurs on Sunday.