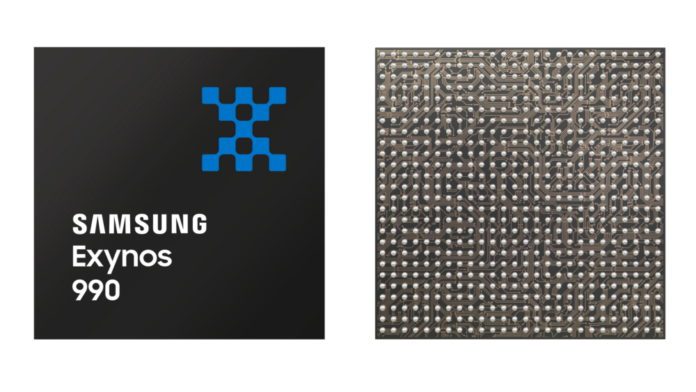 Electronics giant Samsung is ready to bring its new flagship SoC that will power the upcoming smartphones in 2020. Like Apple, who uses TSMC’s 7nm wafer to manufacture their own SoCs, Samsung makes its node by itself.

Samsung did not reveal the clock speeds of the CPU cores. However, the brand does say that the custom CPU cores can deliver 20% better performance compared to its predecessor.

The SoC features a Mali-G77 MP11 GPU which replaces the previously used Mali-G76 MP12 GPU present in Exynos 9820. This new GPU also provides significant improvement in performance or power efficiency of up to 20% compared to its predecessor. With this GPU, Samsung also promises a lag-free gaming experience.

Talking about the NPU, the Exynos 990 is equipped with Dual-Core NPU, an extra core than the Exynos 9820’s NPU. Speaking of camera support, the SoC has an improved Digital Signal Processor (DSP) which works with the new NPU for better camera performance, virtual assistant, and extended reality.

This SoC does support up to six cameras with high resolution up to 108MP and Samsung also has its own 108MP sensor. The Exynos 990 even supports 8K UHD video decoding at 30 frames per second.

The SoC supports displays with up to 4K UHD resolution. It also has a 120Hz refresh-rate driver display support alongside 10-bit video and HDR display support. The Exynos 990 supports LPDDR5 RAM and has both UFS 3.0 & UFS 2.1 storage options.

Speaking of connectivity, the Exynos 990 features an Exynos Modem 5123 that enables hyper-fast 5G speeds. Samsung says that it’s new 5G modem supports up to 7.35Gbps download speeds in mmWave and 5.1Gbps in a sub-6GHz setting with up to 8x carrier aggregation.

This new modem has also been built on the 7nm EUV process that supports E-UTRA-NR Dual Connectivity (EN-DC) that “combines LTE and 5G connectivity to increase mobile download speed”.

On the security front, Samsung says that it has newly added an integrated Security Element (iSE) layer that stores and handles personal data in a separate space from the OS.