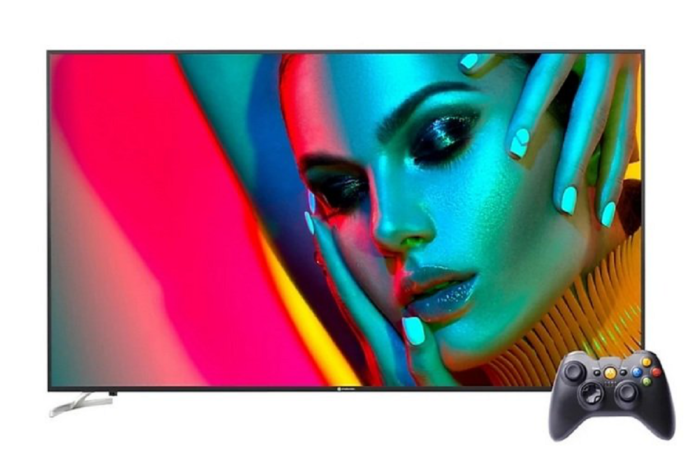 The smartphone giant Motorola stepped into the TV market just like other smartphone manufacturers last month with their wide range of Android TVs, from 32-inches to all the way up to 65-inches. The US-based company is not stopping yet, by launching a 75-inch 4K LED television.

Like its other TVs, this one too comes bundled with Wireless Android TV Gamepad that lets you play your favourite games on your TV without even opting or buying a new wireless joystick.

Coming to the specifications of the TV, you get a 75-inch 4K IPS LED display with 3840 x 2160 pixel resolution including support for Dolby Vision and HDR 10. It also comes with a 178-degree viewing angle, 60Hz refresh rate and 450 nits of brightness.

It is powered by an unknown chip comprising of 1GHz quad-core Cortex-A53 CPU and a Mali-450 GPU. For the internals, we have 2.5GB of RAM and 16GB of onboard storage. Like its other Android TVs, this one too features a 30W Speaker output with support for Dolby Audio & DTS TruSurround.

The TV runs on stock Android 9.0 Pie TV OS and offers endless Google features including Google Assistant and Play Store, Play Movies, Play Music and more. It comes with a bunch of pre-installed apps including YouTube, Hotstar, Amazon Prime Video and Netflix. You can download more apps from the Play Store and get more content for your TV.

The TV remote is similar to other TVs previously launched by the company, the remote here is a Combi Remote (Bluetooth + Infrared) with dedicated Google Assistant, Netflix, Google Play, YouTube Hot Keys. Like any other Android TV, this one too has built-in Chromecast support that lets you cast anything to your TV from your smartphone provided you are on the same WiFi network.

Motorola will charge a hefty fee for ₹1,19,999 for this TV which is pretty surprising because the 65-inch version costs just ₹64,999, nearly double the previous amount. While the Flipkart page lists it to be coming soon, Motorola has no word on when it might be available but we expect it to launch soon as the festive season is going on.

Overall the specs are decent but considering the fierce competition in the TV market, it has to challenge the best premium TV currently available in the market i.e the 65-inch OnePlus TV Q1 Pro which features QLED panel along with faster CPU, internals and has a dedicated soundbar even though costing under Rs.1 lakh.

Motorola Moto E22s will launch on October 17 in India